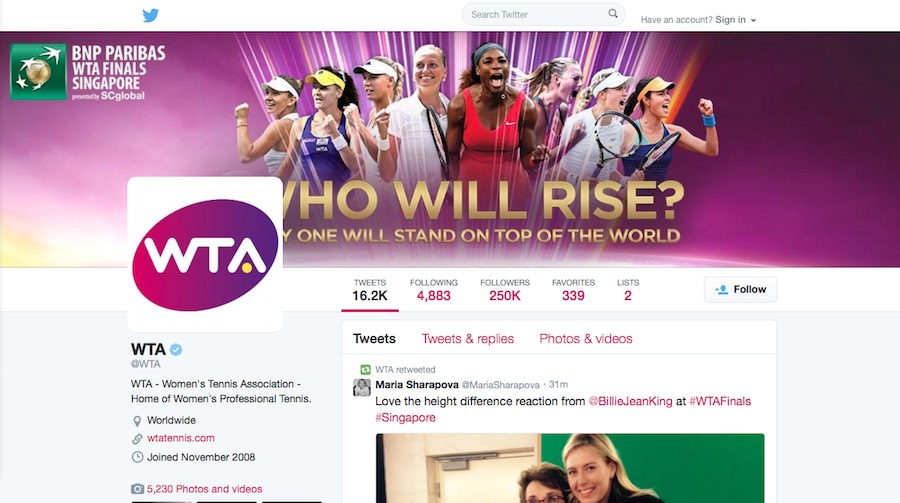 The WTA Championships in Singapore is about to finish its rookie year. An event that has gone beyond the tennis courts with music, fan engagement and conferences. One of the aims of the WTA and the Championships is to grow women’s tennis throughout the world, focusing foremost on the Asia-Pacific region. How does this event contribute to the growth of women’s tennis? More important, is the WTA successful in their quest?

From 2014 through 2018 the WTA Championships are taking place in Singapore. By relocating the event from Istanbul, where it was being held from 2011 to 2013, to Singapore the WTA has made a clear step into further targeting the Asia-Pacific region. Since Stacey Allaster came into the job of CEO in 2009 the WTA has made big plans and big changes. After the WTA’s 40th anniversary a new mission was established “to become the most inspirational and exciting sport entertainment experience”.
Growing through targeting new geographical markets, specifically the Asia-Pacific region, has been on top of the ‘to do list’. It is not a coincidence that the region had 16 WTA events in 2014, a 23% increase over 2013. In 2014 almost 30% of the 54 WTA events were held in this region.

To become the most exciting entertainment in sports

In order for the WTA to fulfill their mission of becoming the most exciting entertainment in sports they have to offer more than just tennis. That is exactly what they have done with the Championships. Expanding the event from six to ten days and incorporating more double teams, matches between rising stars and legends. Also off court the WTA Championships provides entertainment with a Mariah Carey concert and a major fan zone. The draw ceremony was held in a mall bringing it closer to the fans. And seminars, including sponsors and coaches, took place throughout the week.

The WTA’s plan of growing women’s tennis and becoming the most exciting entertainment in sports is not one that can be successful overnight. It takes time to grow, especially in a relatively new region. The question remains whether the WTA is making the right choice by targeting, rather aggressively, the Asia-Pacific region.
Major improvements have been made in the visibility of women’s tennis. In 2012 fan engagement increased 300% on Facebook and Twitter during the Championships. While recent editions of the Championships have seen record-breaking attendance figures.
The WTA also reported that ‘attendance, broadcast and exposure have set new records in the [Asia-Pacific] region’.

Still a lot of work

Despite these positive numbers, women’s tennis is unfortunately still far behind men’s tennis. During Indian Wells earlier this year it was clear that attendance figures of women’s matches did not reach the level of the men’s (as noted in this article of Bleacher Report).

Not only within stadiums women’s tennis still has to catch up with men’s tennis. As of October 24th 2014, the WTA has 250,000 Twitter followers and 1.4 million Facebook likes. That is respectively 37% and 52% of the social media followers the ATP has.

Finally, more important than anything else is the reaction of the existing fan base. More tournaments in the Asia-Pacific region means less in the rest of the world. Are European or South American fans happy with the shift in focus of the WTA?

It is difficult to change and to grow. The WTA has started a long-term project, where faults will be made along the way (for example the ‘strong is beautiful’ campaign might not be the best). They are far from where they want to be and should be, but progress has certainly been made.