How did World Tennis Day play out? 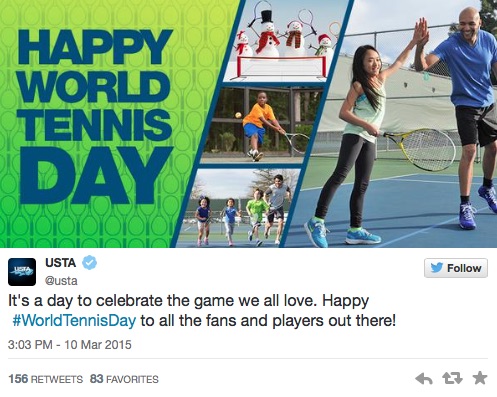 It is interesting to see how World Tennis Day played out online. On March 10th 5,500 tweets were sent containing the ‘official’ hashtag #WorldTennisDay (stats via topsy.com – no longer available). There was also a peak in tweets using the word ‘tennis’. Clearly World Tennis Day got people talking online and the sport of tennis got promoted along the way. Whether this translates into more active tennis players is difficult to say. 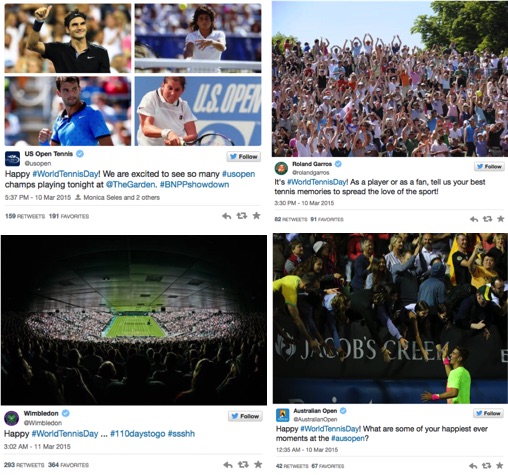 Many governing bodies – local, national and international – also got involved online during World Tennis Day. Many ‘Happy #WorldTennisDay’ were tweeted. All four Grand Slams promoted the day, just as Tennis Australia and the USTA. Most of them found a way to tie in their own event or organisation. 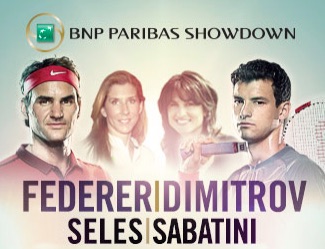 The highlight of World Tennis Day was the 8th edition of the BNP Paribas Showdown at Madison Square Garden. This year Federer played Dimitrov and legends Sabatini and Seles faced off.
Tickets were still available on the day of the event with ticket prices ranging between $50 and $400. The event has major sponsors, was live broadcast and had fan interaction – all elements needed to promote tennis.

The future of World Tennis Day

Tennis was definitely celebrated on World Tennis Day. There was an increase in Twitter chatter and some great initiatives took place all around the world. Yet we will not hear about the many local events that took place to promote tennis within communities. This makes it difficult for World Tennis Day to become a real international movement. There is certainly a possibility to make this yearly event far bigger than it is now and to promote tennis even further.