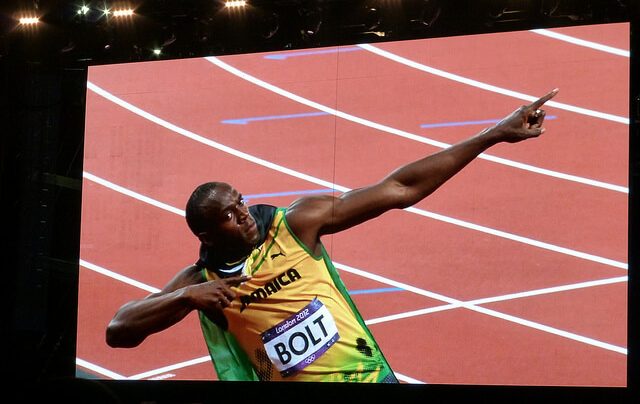 Few other athletics stars, if any, are recognized as widely as Usain Bolt. Being the fastest man on earth and holding records on the 100m, 200m and 4x100m relay, ‘The Lighting Bolt’ is without a doubt an incredible athlete. He singlehandedly brings extra people to a stadium and makes the sport more popular. A good trend, especially after several high-profile doping scandals recently disgraced the sport. So why is Bolt an idol in athletics and in sports? And what is it that makes him one of the world’s most marketable athletes? Well, here are three reasons.

Bolt is consistently faster than his competitors. Being able to compete with the best is a necessity to market an athlete and Bolt has definitely proven that he is the best. He holds the World Record for both the 100m and 200m, has won 6 Olympic Gold medals and has been crowned World Champion 7 times. An impressive list, especially considering Bolt does not have the typical physique of a sprinter. With 1.95m, Bolt is tall and should have a disadvantage at the start of a race. Further on in the race he has an advantage – something he clearly uses.

Usain Bolt is an intriguing person with charisma and character. He knows how to play the audience, so every race he performs a little show. Before the 100m final at the World Championships in Moscow it was an imaginary umbrella and during the London Olympics he imitated a DJ – very inventive. It is part of the brand Usain Bolt, just like his trademark lightning signature. All of it makes the race more interesting to watch. The audience just loves it and they love him.

PACE Sports Management is one of the important components of Bolt’s team. The company manages athletes and together with several other people on Bolt’s team, they have done a great job on establishing the brand Bolt. In 2011 Sportspro named Usain Bolt the most marketable athlete. When he won three gold medals at the Olympics the following year his marketability increased further. Some of his sponsor deals include a long-term contract with Puma, a deal with Virgin Media and Samsung.
In addition, Bolt and his team have established a great online presence, something that can be very beneficial to sponsors. With 11 million people liking his Facebook page and nearing 3 million followers on Twitter, Bolt can easily spread his message and that of his sponsors.

So because he is faster, more intriguing and has a great team behind him, Bolt has a high commercial value. This is also of great value to the sport. Hopefully for us he will still entertain us at the Olympics of 2016.