The ‘We Are Tennis’ campaign by BNP Paribas 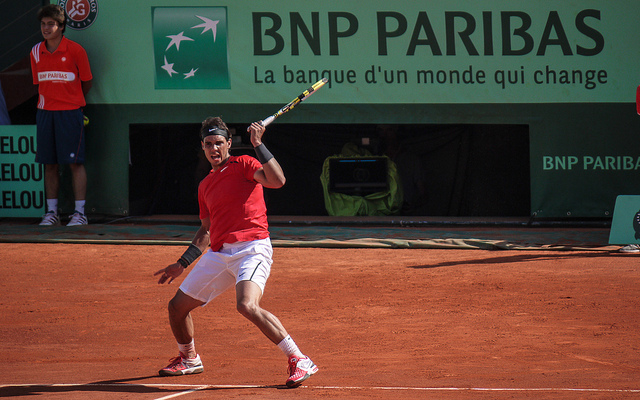 BNP Paribas is also active as a sponsor in tennis. For years they have run the ‘We Are Tennis’ campaign. So what does this campaign look like? And why are you likely to have seen fans wear ‘We Are Tennis’ shirts?

BNP Paribas sponsors various tennis tournaments. Among others they sponsor major events like Roland Garros, Indian Wells and Rome. The French multinational is also the title sponsor of the Davis and Fed Cup. Although BNP Paribas no longer sponsors the Paris masters, their many other partnerships still make them highly visible within tennis.

‘We are tennis’ campaign

In 2011 BNP Paribas launched wearetennis.com, an online hub for tennis fans. Not with the intention to promote the company’s services, but to give tennis enthusiasts a (online) meeting-point.

Available in five languages – English, Dutch, French, Italian and Turkish – the hub contains information such as the latest news, blogs, live scores, social media content and more. There are differences among the different language versions, with the French and Italian versions having a different, seemingly more extensive website.

Differences between the languages can also be found in what is offered beyond the website. The Italian niche, for example, has a fan community app. While a live scores app is available in French and English.

On social media there are also different accounts for several of the languages. Across these domains BNP Paribas has established a sizable online community. The Facebook (>1,85 million likes) and Instagram (>28K followers) accounts are well followed as of June 2018. While the English Twitter account has over 109K followers, in addition to over 76K followers for the French account and almost 57K for the Italian account.

The whole setup of the ‘We Are Tennis’ campaign had the underlying goal of creating a community of tennis enthusiasts.

In 2015 this led to the creation of the ‘We Are Tennis Fan Academy’. This school for tennis fans aims to liven up the stadiums so the atmosphere becomes more like that in stadiums at other sports. The start of the campaign saw fans from around the world send in videos showing off their supporting potential. A selection of fans were then interviewed by John McEnroe, before the final group got a training in supporting the day before a Davis Cup tie.

Ever since you regularly see groups of loud enthusiastic fans in the stands wearing similar coloured shirts with ‘We Are Tennis’ on it. Online the campaign has also made an impact with a community of almost 10K on Facebook.

So without overselling their services, BNP Paribas has been able to bring tennis enthusiasts together online and at events. WeAreTennis.com is visible on the ball kids shirts at Roland Garros, in the stands among the spectators and across social media channels. Whether the campaign has value to the bank in respect to more clients remains a question, but it certainly has created a movement among tennis fans.