The sponsorship landscape at the top of professional tennis

Note: This overview is from the beginning of 2020. So midseason switches, like Lucas Pouille’s switch from Adidas to Le Coq Sportif and from Prince to Babolat (March 2019), have not been taken into account. For the latest sponsorships click here.

A new tennis season means new outfits on court. But what does the sponsorship landscape at the top of professional tennis look like?

For the fifth year we look at some (recent) major deals and break down the sponsors of the top 30 men and women. You can also have a look at our overview of men and women tennis sponsorships and shirt sponsors in tennis. 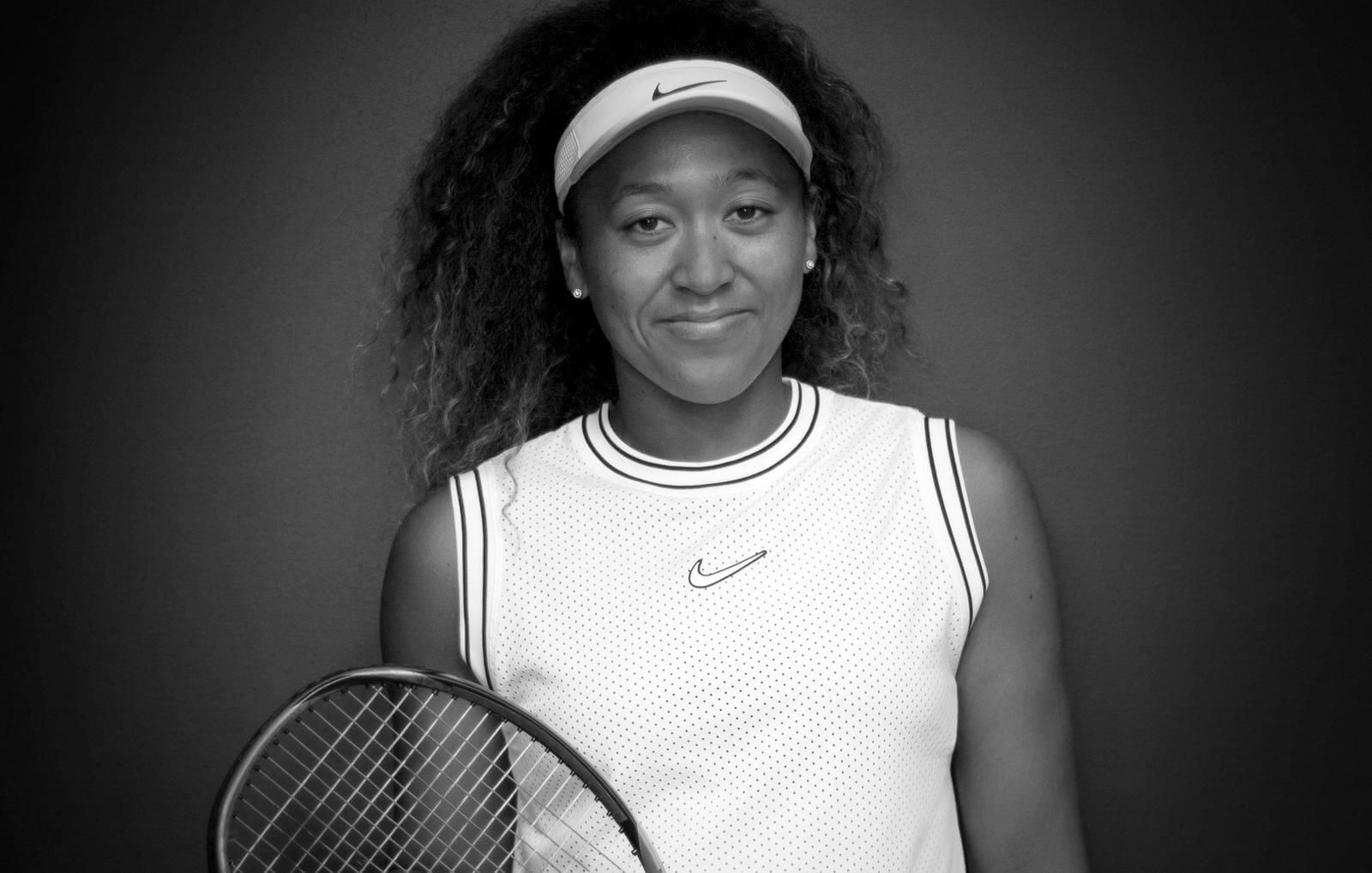 Sponsorship breakdown of the top 30

To map the sponsorship landscape at the top of professional tennis, an overview was made of the top 30 men and women at the start of the 2020 season and their clothing and racket sponsors.

A range of brands sponsors the elite of professional tennis. It is clear that Nike and Adidas, the most recognisable brands in the sports apparel industry, are well represented in tennis. The same goes for Babolat, Wilson, Head and Yonex for rackets.
Yet smaller and upcoming brands are also getting eyeballs on their brand via high ranked players.

Nine brands are getting exposure by the top 30 women. Nike (13) supplies almost half of the top players.

Adidas and Fila follow with four players, while Lotto and Yonex each have two players playing in their gear.

Top-30 players also wear Lacoste, New Balance, Ellesse and Asics (all 1). One player does not have a (visible) sponsor at the moment. 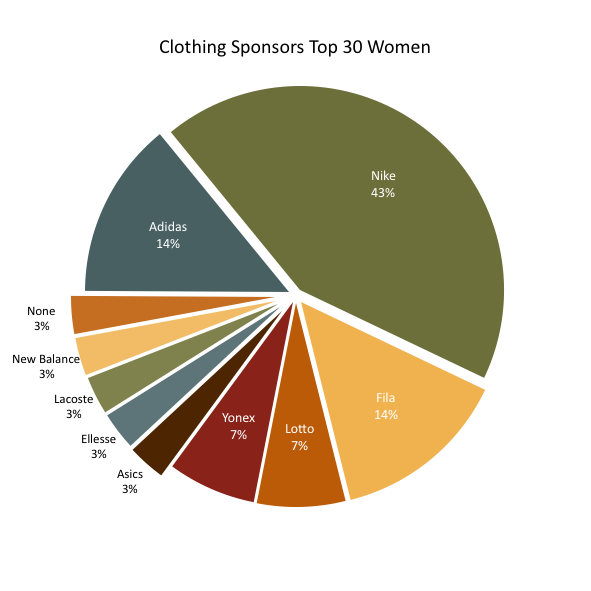 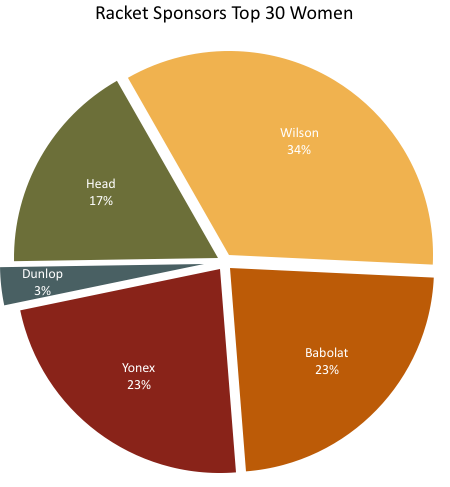 The top 30 men wear 11 different clothing brands. Nike (7), Adidas (5), Asics, Lacoste (both 4) and Fila (3) are the main clothing sponsors. Other brands – Uniqlo, EA7 (Emporio Armani), Lotto, Yonex, Dunlop and Joma– sponsor either one or two of the high-profile players. 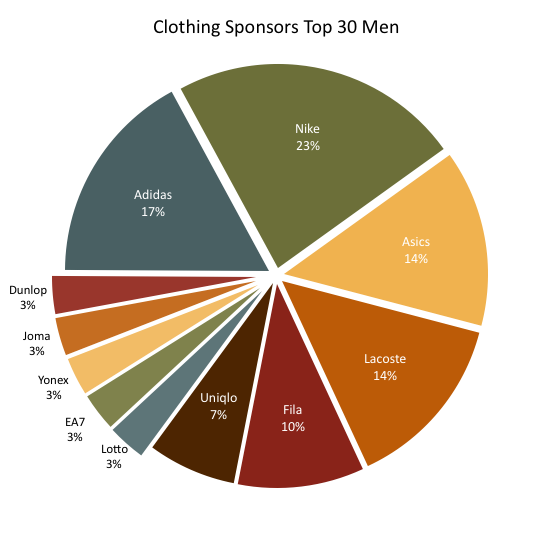 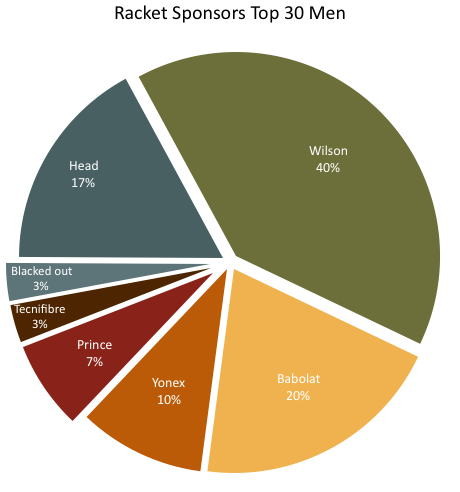 On the women’s side Naomi Osaka switched to Nike from Adidas in April 2019. Nike already added Simona Halep to their portfolio in 2018.

For the 2020 season Maria Sakkari, Karolina Muchova (both top-30) and Elena Rybakina (top-50) switched to Adidas. Sakkari and Rybakina switched from Nike, while Muchova had no sponsor during part of last season. French player Carolina Garcia also switched from Nike. She now wears Asics. While Ekaterina Alexandrova traded her Lotto gear for Fila clothing.

Danielle Collins traded her Head rackets for Babolat in the off-season.

Hydrogen – the skull logo brand – made some high profile signings during the 2018-19 off-season after Fabio Fognini switched to EA7 (Emporio Armani). The Italian brand was able to sign the now-retired Tomas Berdych who had multiple sponsors during his career, including H&M gear which he helped co-design. They still sponsor WTA-player Polona Hercog and Spaniard Feliciano Lopez, who previously wore Ellesse.

American brand K-Swiss now sponsors Cameron Norrie (previously Ellesse) and Ajla Tomljanovic (previously Nike). An investment in two young players around the top-50 mark that could well pay off in the future.

In 2018 Roger Federer and Nike parted ways after a long and fruitful relationship. The Swiss maestro switched to Japanese brand Uniqlo for clothing, but still wears Nike shoes. His personal logo is currently still under Nike’s control, but the rights might come back to him in the future.

Uniqlo could add Federer to their portfolio that already held Kei Nishikori, because they parted ways with Novak Djokovic in 2017. The Serbian now wears Lacoste clothing and Asics shoes.

Other high ranked players, like Nadal and Serena Williams, have had the same sponsor for years. Nadal’s contract with Nike is said to be similar to Federer’s old Nike contract. While Uniqlo’s deal with Kei Nishikori (renewed in 2016) may well exceed $10 million a year, according to insiders.

Djokovic supposedly earns around $9.4 million a year from his five-year contract with Lacoste and $4 million for wearing Asics shoes.

Of course sponsorship deals end and new ones are formed. Finding a (right) sponsor is not always easy. Yet the sponsorship landscape at the top of professional tennis is diverse with quite some brands sponsoring the players’ clothing and rackets. Some players, like Venus Williams and Camila Giorgi, even wear their own clothing line.

To know which brands players are wearing and playing with you can take a look at our overview of tennis sponsorships: