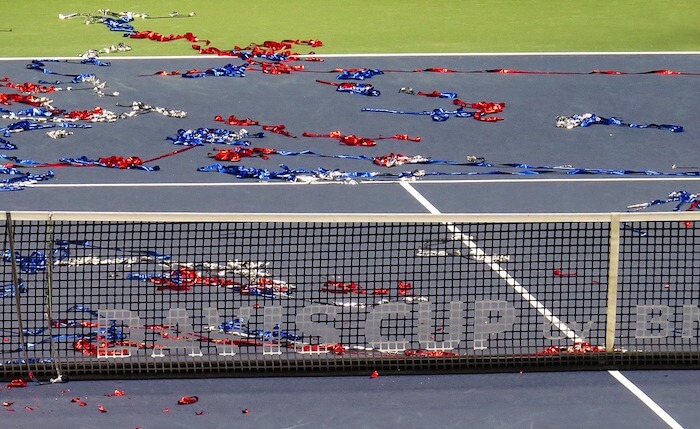 Tennis is no stranger to introducing new formats and new competitions. Some of them have become big successes and have attracted new fans in new markets, while others have disappeared with financial problems.

The International Tennis Federation (ITF) has now decided to change the format of the 118-year old Davis Cup, the men’s team competition. So what does the new Davis Cup format look like? And why is it introduced?

The new versus the old Davis Cup

The main change in format is that from 2019 onwards the Davis Cup (highest group) will be played in one place during a one-week event at the end of the season. Whereas the old Davis Cup format had four weekends throughout the season where teams competed to advance to the next stage and one team always played at home.

The first edition of the new format will take place at La Caja Magica in Madrid, Spain from 18 till 24 November 2019. 18 teams will participate, including last year’s four semi-finalists (in 2019 – France, Croatia, USA and Spain), two wildcards (in 2019 – Argentina and Great Britain) and 12 qualifiers (qualifying takes place on February 1st and 2nd 2019).

The 18 teams will be divided into six groups of three. And instead of a three-day five-match tie, a tie will now consist of two singles and a doubles match. The six round robin winners and two best second placed teams advance to the quarterfinals and thus the knockout stages of the competition.

Why change the Davis Cup format?

So why change a format that has been around for such a long time and has such a rich history? Well, there are several reasons.

First of all, a lot of elite players did not play every Davis Cup tie. Sometimes they missed out due to injury, but more often for other reasons. Weighing the costs of another tie in an already packed schedule, sometimes flying halfway across the world, best-of-five matches and changing surfaces, against in their eyes little gain by playing, it was an easy decision to skip a Davis Cup meeting. However, with star players missing out, the Davis Cup value to fans and the market also took a hit.

Financial issues where therefore a logical result, with funding and sponsors hard to come by. The new Davis Cup format is financed by a 25-year, $3 billion partnership with investment group Kosmos, which is headed by FC Barcelona player Gerard Piqué and has Japanese financial backing, making the financing therefore no longer a pressing issue.

An improvement or not?

Whether it is an improvement remains the question though. A one-week event with no in-season changes of surfaces should secure the participation of more top players. However, at the end of the season many players are dealing with (minor) injuries. So top players might still not play.

It will likely also be easier to get sponsors for one major event broadcasted all across the world than many ties in different countries. The income will only add to the already substantial financial injection from Kosmos.

Yet the old Davis Cup was special when it came to ambience. Will the new format be able to compete with the unique Davis Cup atmosphere fans were able to create for their home nations?
The new format has no home matches, apart from the host nation. The majority of fans will have to travel abroad to see their players compete in the Davis Cup, making it harder to attend. Of course, when they do attend, they can also see their favourite players from other countries.

Apart from whether players and fans will like the new format, the restructured Davis Cup will also have plenty of competition from other similar competitions.

The ATP, the governing body of the men’s tour, announced a resurrected and revamped ATP Cup, with the first edition taking place in January 2020. Similar to the Davis Cup, nations will compete with one another to be crowned best of the world. The event will be co-organised with the governing body of Australian tennis, as most ATP tournaments take place in their region at the beginning of the season.

And then there is also the Laver Cup, where European players compete against players from the rest of the world. The event, founded by Roger Federer and his management company Team8, already has two successful editions in the books and seems likely to stay on the calendar.

Coexist or doomed for failure?

So with the new Davis Cup, the upcoming ATP Cup and the Laver Cup there are enough men team competitions on the calendar in addition to the already full regular calendar. The question will be whether these three team competitions will be able to coexist. Will fans really like so many similar events and formats? Especially since the new Davis Cup and the ATP Cup, almost identical in setup, will be mere weeks apart.

If the ITF decides to change the Fed Cup (the women’s team competition) format like the Davis Cup and combine the events, they might have the edge over the ATP Cup. But whether that will happen or whether it will all be just too much of the same, with one having to give way to the other, will have to be seen.