3 simple elements of the nominated ‘Show Your Colours’ campaign 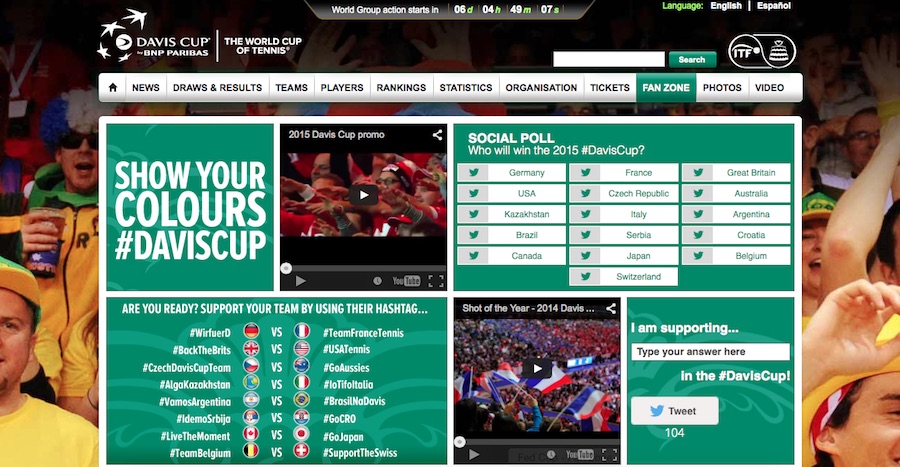 The Davis Cup and Fed Cup are the ITF’s flagship competitions. Unfortunately both competitions are the first to be dropped by tennis players when their schedule asks for it. Roger Federer and Stanislas Wawrinka will skip Switzerland’s upcoming Davis Cup tie after winning the competition in 2014. Federer did not find it a difficult decision: ‘It’s been a big burden for me throughout my career and one of the things that have caused more difficulties in my life than many other things’.

It is a huge challenge for the ITF to keep fans engaged when star players frequently pull out. The ITF launched a simple yet effective campaign last year to engage fans. The ‘Show Your Colours’ campaign urges fans to support their country. The campaign is one of six campaigns shortlisted for a Sport Industry Award for Best International Marketing Campaign.

‘Show Your Colours’ has been featured at 107 ties in 59 different countries. The global campaign uses branding elements for promotion, in-stadium activities and all of the ITF’s website and social media activity. As a result of the campaign the ITF has seen a 91% increase in social media followers. 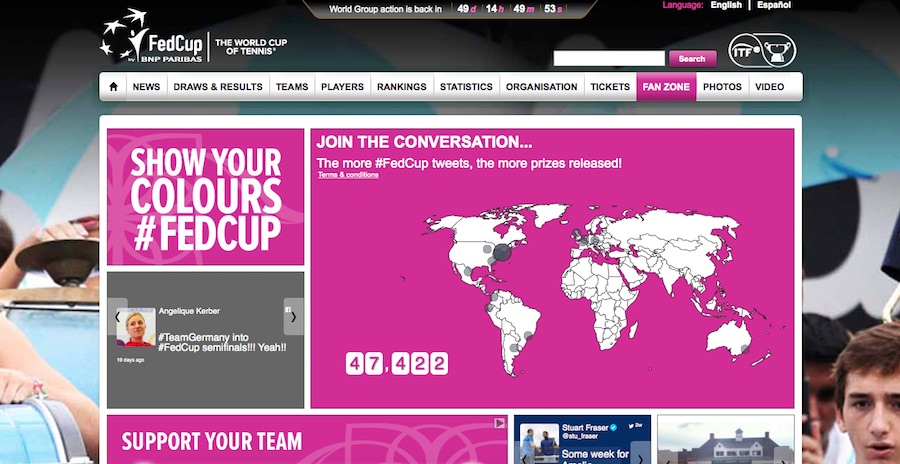 The websites of the Davis Cup and Fed Cup both have a ‘fan zone’ page. The page is a social media hub where fans and teams connect. The hub includes, among others, social media polls, twitter feeds and contests. The ITF says the innovative online hub has showcased around 25,000 pieces of content since the start of the ‘Show Your Colours’ campaign.

Another element of the ‘Show your Colours” campaign is the social media hashtag-battle. Fans can go to the social media hub to vote or to twitter to post their team’s handle. A social fan-meter can then be found online or even within stadiums to display which team is winning the social media battle.

The campaign and ‘battle’ element give nations the opportunity to localise the global campaign and ask their own fans to show their colours.

A third element of the campaign is the #ShowYourColoursSelfie. It is a request to fans to take a selfie and post it on social media. Participants can win prizes. For this year’s first round the Fed Cup slightly altered the selfie-hashtag into #ShowYourPassionSelfie.

The fan hub, the social media battle and the selfie form the basis of the ‘Show Your Colours’ campaign. The ITF has done an outstanding marketing job.
However, stars withdrawing from Fed Cup and Davis Cup ties is a problem and not the only one. New tournaments and formats, such as the IPTL, are being introduced. In time these tournaments may become major competitors to the ITF’s flagship competitions.

What did you think of the ‘Show Your Colours’ campaign? Do you think tennis will see more team-competitions organised by the WTA or ATP in the future?