The biggest club competition in European football is down to its last four competitors. Today Atlético Madrid will face Chelsea in the first leg of the UEFA Champions League semifinal, while Real Madrid will face defending champions Bayern Munich tomorrow. Based on revenue Real Madrid and Chelsea will play the final in Lisbon, Portugal, on May 24th and then Real will win ‘la decima’.

It is interesting to see how money can affect the game. It is clear that big sums of money invested by, often foreign, investors are giving some clubs the advantage. Paris Saint-Germain has been able to make a large step towards the top of European football by spending a lot of money on great players. In the past clubs like Manchester City (£509.6 million invested since 2008) and Chelsea (£328.7 million since 2008 – have been investing large amounts since Abramovich took over in 2003) made similar steps to Europe’s best. Although great players do not necessarily make a great team, these three clubs have shown that such investments can win you prizes. (That is as long as Financial Fair Play regulation accepts these kinds of investments.)

Scientific research has long proven that there is a relationship between revenue and on field success. Over a decade ago Szymanski already demonstrated a relationship between revenue and league position and between wage expenditures and league position in the Premier League. Better performance leads to higher revenue due to ‘increased attendance, higher ticket prices, increased sponsorship, merchandising an TV income’ (Szymanski, 1998). More revenue implies more funds to invest (in wages) and therefore the ability to buy higher quality players, who in turn can win more matches.

So based on research we can say that the higher a club’s revenue, the more success it will have. Consequently it may be concluded that clubs with more revenue will have an edge over clubs with lower income, due to the ability to spend more.

Richer clubs have the edge

To see if there is some truth in this, Score & Change took a look at how often last year’s revenue predicts the right winner in this year’s Champions League knockout phase ties*. Based on the latest revenue numbers of Deloitte’s Annual Football Money League we can predict which club has the ‘upper hand’ in a tie**. Over the period 2006/2007 till 2013/2014 (excluding the upcoming semifinals and final) it was observed how often the club who had higher revenue in the previous season won the tie. 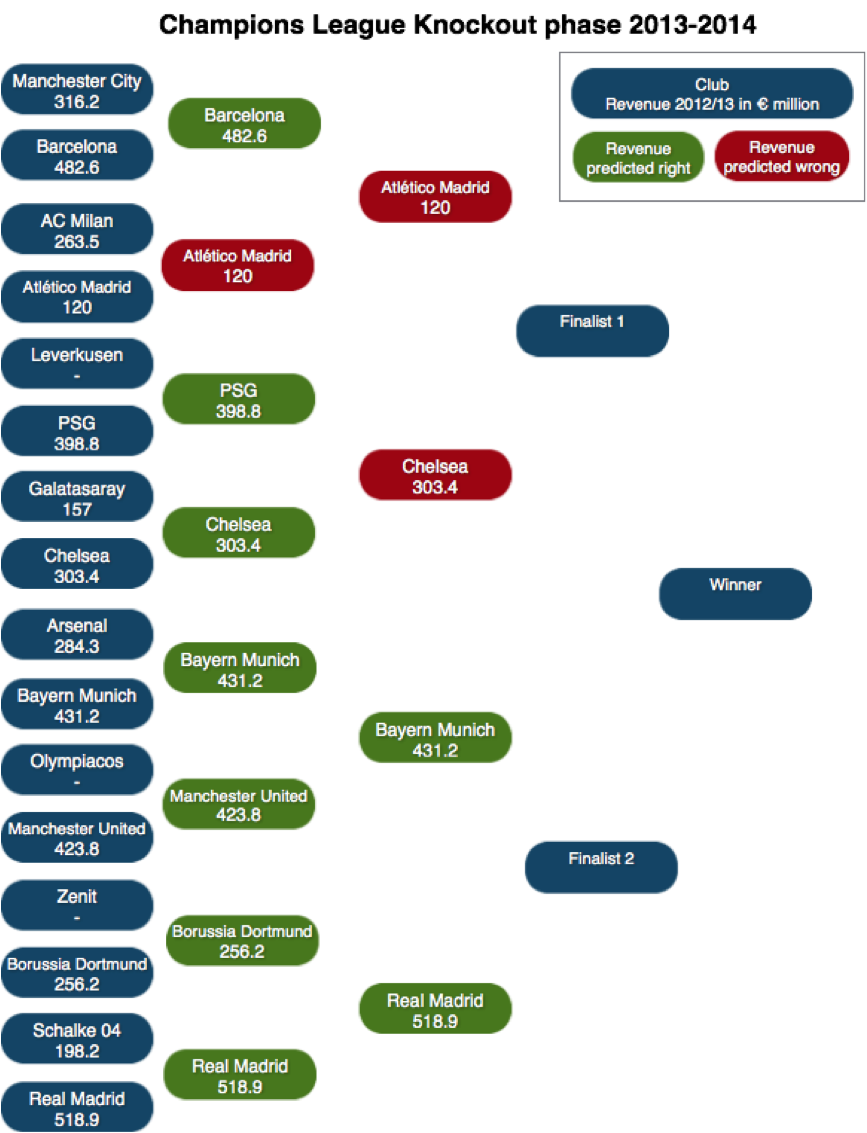 In the knockout phase there were a total of 99 ties, of which 6 finals. Since the final consists of just one match at a neutral venue, a distinction can be made between one-legged ties (the 6 finals) and two-legged ties (93 knockout phase matches). In the period observed 73% of the time the clubs with the highest revenue won. This implies that clubs with more revenue have an edge. Excluding the finals and thus only taking two-legged ties, this is even 74%. While in finals revenue does not seem to have any predictive power with revenue predicting the right winner only half of the time (3 out of 6).

Revenue cannot predict every outcome, since factors as referees’ decisions, luck and form are of upmost importance. But on the surface it does seem like these factors have less impact over two matches and that more revenue gives a club an edge over poorer teams.