Note: This article is subject to changes when new deals are announced.

Who wears what in the English Premier League? Which apparel brands are dominating on the Premier League pitches? Are most shirt and sleeve sponsors gambling companies?

Below we answer those questions and more by giving you an overview of the sponsors – kit, shirt and sleeve sponsors – of the 2018/2019 Premier League clubs. 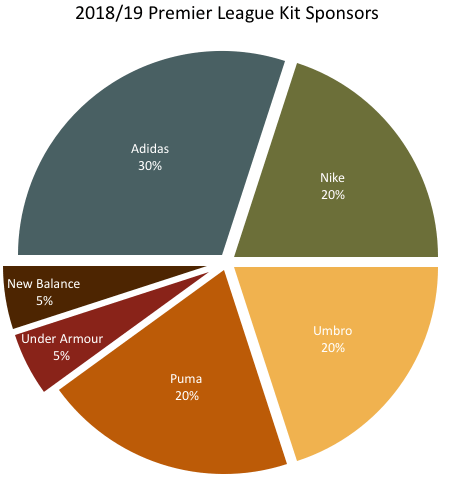 Adidas is the main kit supplier with six teams. Manchester United, Watford, Leicester City and the three promoted sides Cardiff City, Fulham and Wolverhampton Wanderers are all sponsored by the German brand.

Adidas takes over from Puma, who held that title last season. Puma sponsors four teams. They lost both Leicester City and Huddersfield Town, to respectively Adidas and Umbro. However, they added Crystal Palace to their Premier League portfolio that already contained Arsenal (who will switch to Adidas in 2019), Burnley and Newcastle United.

English manufacturer Umbro has four teams in their portfolio, one more than last season: Bournemouth, Everton, Huddersfield Town and West Ham United. New Balance and Under Armour each sponsor one team.

Four teams have switched brands for the upcoming season, including Crystal Palace from Macron to Puma, Wolverhampton Wanderers from Puma to Adidas and Huddersfield and Leicester from Puma to Umbro and Adidas respectively.

Gambling companies remain a favourite partner for clubs when it comes to shirt sponsorships. Nine out of 20 Premier League clubs will feature a gambling company on the front of their shirts this season. That is one more than last year. Two of the three clubs that were promoted have a gambling shirt sponsor. Burnley switched from one gambling sponsor (Dafabet) to another (Laba360) this year.

It is notable that none of the traditional top 6 has a betting or gambling logo on their shirtfronts. Gambling companies are likely willing to pay more than most non-gambling companies to partner ‘smaller’ clubs, while ‘big’ clubs have more options to choose from.

Even if they do not have a gambling shirt sponsor, all clubs seem to partner with gambling companies. Some of them even have deals with more than one firm.

The companies come from around the world, with a majority having their headquarters in Asia and Europe.

Last season was the first time Premier League clubs were allowed to have sleeve sponsorships. But not all clubs had one. Arsenal for example did not, because of contractual obligations. This year the Gunners will display a ‘Visit Rwanda’ logo on their sleeve, which caused some controversy when it was first announced.

Manchester United will also debut a sleeve sponsor in 2018/19. Manufacturing and hospitality company Kohler will be visible on the Red Devils’ sleeves.

Promoted side Wolves will have a first in sports sponsorship with the logo of a cryptocurrency exchange platform, CoinDeal, on their sleeve.

Note: Clubs will be added when the sleeve sponsor is official.

The Premier League starts in the weekend of August 11.