Note: This article is subject to changes when new deals are announced.

Who wears what in the English Premier League? Which apparel brands are dominating on the Premier League pitches? Are most shirt and sleeve sponsors gambling companies?

Below we answer those questions and more by giving you an overview of the sponsors – kit, shirt and sleeve sponsors – of the 2019/2020 Premier League clubs. We also take a look at the league’s official partners. 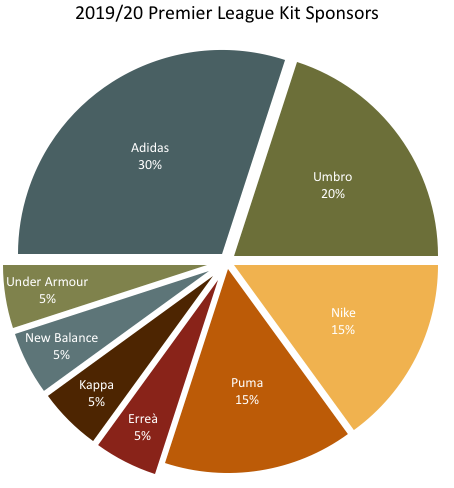 The 20 Premier League teams are sponsored by eight different clothing brands. We will see Adidas, Umbro, Nike, Puma, Erreà, New Balance, Kappa and Under Armour on the Premier League pitches this year. In 2018/2019 there were six different brands sponsoring Premier League kits, while there were eight in 2017/2018 and ten in 2016/2017.

Adidas is once again the main kit supplier with six teams. Manchester United, Watford, Leicester City and Wolverhampton Wanderers will continue wearing the German brand. Promoted side Sheffield United is added, along with new partner Arsenal who switched from Puma. Cardiff City and Fulham were both relegated while wearing Adidas last year.

Umbro follows Adidas by sponsoring four teams. Bournemouth, Everton and West Ham United were already part of Umbro’s portfolio. For the 2019/2020 season they added Burnley, who switched from Puma.

Despite losing Arsenal and Burnley, Puma still sponsors three teams. Besides Crystal Palace and Newcastle they secured a multi-year partnership with reigning champions Manchester City – and several other clubs belonging to the City Football Group.

New Balance, Under Armour, Erreà and Kappa complete the list by each sponsoring one team.

Like last season, four teams have switched brands for the upcoming season, including Manchester City from Nike to Puma, Aston Villa from Luke 1977 to Kappa and Arsenal and Burnley from Puma to Adidas and Umbro respectively.

Gambling companies remain a favourite partner for clubs when it comes to shirt sponsorships. Ten out of 20 Premier League clubs will feature a gambling company on the front of their shirts this season. That is one more than last year and two more than in 2017/2018. Two of the three clubs that won promotion have a gambling shirt sponsor. Burnley once again switches from one gambling sponsor (Laba360) to another (W88).

It is notable that none of the traditional top six has a betting or gambling logo on their shirtfronts (or sleeve). Gambling companies are likely willing to pay more than most non-gambling companies to partner ‘smaller’ clubs, while ‘big’ clubs have more options to choose from.

Even if they do not have a gambling shirt sponsor, all clubs partner with gambling companies. Some of them even have deals with multiple firms.

The companies come from around the world, with a majority having their headquarters in Asia and Europe.

Since the 2017/18 season Premier League clubs are allowed to have sleeve sponsorships. Not all clubs had one during that first season. Arsenal (Visit Rwanda) and Manchester United (Kohler) for example only debuted a sleeve sponsor during the 2018/19 season.

Burnley (LoveBet), Bournemouth (M88 Masion) and Sheffield United (USG) are the three clubs having the same shirt and sleeve sponsor. Watford’s Bitcoin sleeve branding is an extension of their shirt sponsorship deal with Sportsbet.io.

Financial services (6),  gambling (4) and automotive (3) companies are also favourites as sleeve sponsor. Noticeable is that (so far) there are only four gambling related sleeve sponsors while there are 10 gambling shirt sponsors.

The Premier League lists eight official partners on their website. This does not include their various international and UK broadcast partners. The sponsors/partners have a clear ‘role’. For example Barclays in the official bank and TAG Heuer the official timekeeper. Partners receive exclusivity within their niche. Noticeable is that the Premier League does not list any regional partners (excluding broadcast partners). Several of the other Big 5 leagues do.