Who wears what in the German Bundesliga? Which apparel brands are dominating on the Bundesliga pitches? Are most shirt and sleeve sponsors gambling companies?

Below we answer those questions and more by giving you an overview of the sponsors – kit, shirt and sleeve sponsors – of the 2019/2020 Bundesliga clubs. We also take a look at the league’s official partners. 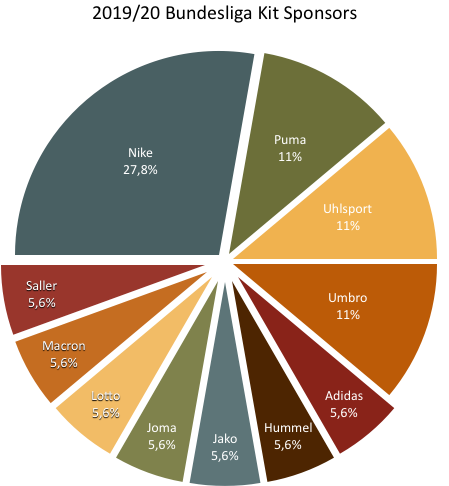 The 18 Bundesliga teams are sponsored by eleven different clothing brands. We will see Adidas, Hummel, Jako, Joma, Lotto, Macron, Nike, Puma, Saller, Uhlsport and Umbro on the Bundesliga pitches this year. This is quite a lot of diversity. Compare it with the Premier League where there are only eight brands sponsoring 20 teams.

Adidas, Hummel, Jako, Joma, Lotto, Macron and Saller complete the list by each sponsoring one team.

Seven of the Bundesliga teams are sponsored by German brands (Adidas, Puma, Uhlsport, Jako and Saller). Adidas and Puma, two of the world’s biggest sporting goods companies, only sponsor one and two teams respectively. However, Adidas sponsors Bayern Munich who won the last seven seasons.

Only one team switched brands for the 2019/20 season. Hoffenheim switched from Lotto to Joma.

The Bundesliga allows only one front shirt sponsor. The shirt sponsors can be categorised into 15 different industries. Far more than in the Premier League. This indicates less competition among shirt sponsors for the same market. Only the food, retail and insurance industries have each two companies active as shirt sponsor.

It is notable that only one team changed shirt sponsor for the 2019/2020 season. Promoted side Union Berlin switched from Layenberger to real estate company Aroundtown.

The companies come mostly from Germany. 14 out of 18 (78%) of the shirt sponsors have their headquarters in Germany. There are three other European sponsors and only one non-European sponsor.

The 2019/2020 sleeve sponsors (known so far) can be categorised into 13 different industries. So like with the shirt sponsors there is a lot of variety in the kind of companies. The automotive (4), logistics (2) and tourism (2) industries each sponsor more than one team.

Note: The table below may be subject to changes when new sleeve sponsors are announced.

The Bundesliga lists only four partners on their website. It is not clear whether these are the only partners at the moment. In September 2018 the German league association announced the extension of their partnership with TAG Heuer.

The Bundesliga starts on August 16th.