Overview of the 2016-2017 Premier League Kit and Shirt Sponsors

The 2016-2017 Premier League has all the ingredients to be a fantastic spectacle with intriguing stuff on and off the pitch. New stars and coaches have entered the wealthiest football competition that earns €5.943 billion (£5.136 billion) in television money between 2016 and 2019. With 3 billion viewers in 225 broadcast territories across the world, the Premier League is the place for sponsors to get exposure. So which kit and shirt sponsors will we see in the Premier League this season?

The 20 Premier League teams are sponsored by 10 different sports brands. We will see New Balance, Umbro, Under Armour, Dryworld, Joma, Macron and JD kits on the pitches in addition to household names such as Nike, Adidas and Puma.

Adidas dominates the field by sponsoring five teams. During the 2015-2016 season the brand sponsored six Premier League teams. Puma and Umbro follow the three-striped brand in number of teams sponsored, by supplying three clubs each. The three brands together supply 55% of the Premier League teams. 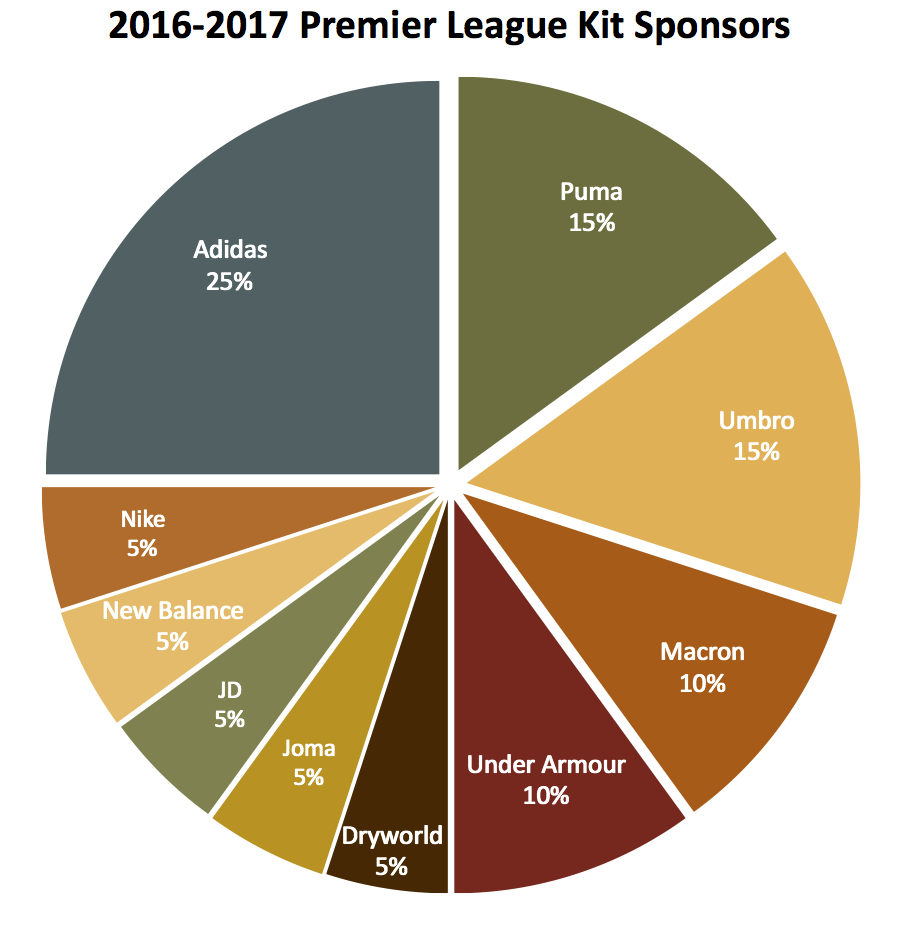 Under Armour is steadily growing its worldwide sponsorship portfolio, also in football. The American brand was the official sponsor of the International Champions Cup earlier this summer and will sponsor a second Premier League team from this season onwards. Southampton announced a seven-year partnership with Under Armour earlier this year and will join Tottenham – who are outfitted by Under Armour since 2012 – in the brand’s portfolio. Both clubs finished in the top six last season, with Tottenham playing a major role in the title race.

Nike sponsors only one Premier League team. With Manchester City the brand has a title contender in their portfolio that has an exciting future ahead of them, not least due to the arrival of new coach Pep Guardiola. Although Nike sponsors only one team, the brand is also official sponsor of the league, giving them a fair amount of exposure on Premier League match days.

Local rival Manchester United wears Adidas since last season. The Red Devils agreed a landmark partnership with the German brand. Having a star to spearhead their partnership and campaigns is of course essential. And that is exactly what they now have after Adidas-sponsored star Paul Pogba transferred to the club for a record-breaking fee of over €105 million. The French midfielder, Manchester United and Adidas are already taking advantage of the deal’s marketing and commercial opportunities.

The betting industry has a lot of interest in the Premier League, partly due to the amount of money circulating and fans’ (potential) interest in betting. All Premier League clubs have partnership deals with betting companies, some only regionally, others per continent or worldwide.

Betting companies account for half of the shirt sponsors in this Premier League season. However, none of the teams finishing in last season’s top six will display a betting logo on their shirt. In addition to the many betting companies, teams are sponsored by companies active in the automotive, duty-free shipping, beverage, telecommunications, airline and financial services industry.