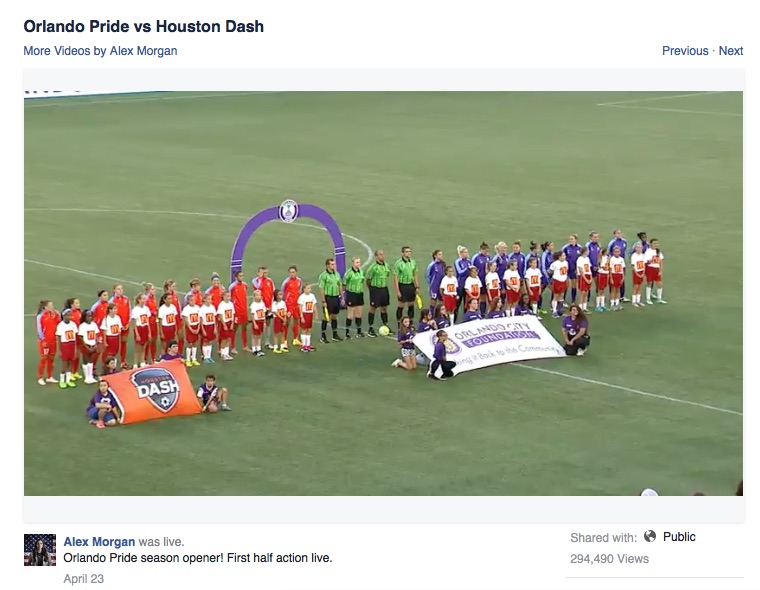 The international market for live-sports content changes rapidly. Social platforms, like Twitter and Facebook, are now bidding for sports broadcasting rights. Due to the development and rise of ‘live video tools’, these platforms – like television – are able to offer live and high quality sports content to fans. It seems that the live-consumption of sports will shift from television to online channels.

This fall Twitter will live stream 10 NFL matches on its platform. The deal is reportedly worth around $10 million. Last year Yahoo already live streamed an NFL match.

Facebook was also interested in the NFL broadcasting rights. With Facebook Live, the platform wants and is able to take advantage of the live streaming trend. At the end of April, American football player Alex Morgan live streamed a whole match – played at the highest level of American women’s football – on her Facebook page. With commentary and replays the two streams – first and second half – were of similar standard as an ‘old-fashioned’ television broadcast. The two videos together have been viewed over 663,000 times, have almost 26,000 likes and received over 7,000 comments. Great numbers for a match not screened on television.

The popularity of live streaming sports content has risen enormously since last year, due to live streaming applications such as Periscope (bought by Twitter), Meerkat and Facebook Live. Sports organisations increasingly use these apps as it gives them the opportunity to generate interesting content for members and fans with fewer and less professional resources. Content is easier to distribute and it is relatively cheap.

A look behind the scenes at sports events and content from top athletes are in particular popular with fans. The Twitter-NFL deal includes live Periscope streams following the teams before and after the matches.

Why is live video streaming the future?

The international market keeps developing. Although sports organisations will continue using live streaming apps to offer fans content from around matches, is it now also about the matches themselves. Television is no longer the only platform bidding for broadcasting rights. Social platforms appear to be a strong new market player. But what is it about sports content that makes this shift possible?

First of all, sports content is best consumed live (time). For this reason sports programming does well on television versus other programming. The so-called shelf life is short. It is not as much fun to watch a match when the score is known. Thus channels attract viewers during matches.

Fans do not only consume sports content through television during matches. Viewers, especially the younger generation, use second screens. Numbers from the Accenture Digital Consumer Survey in 2015 showed that 87% of (all) television viewers watch in combination with a second screen.

Sports fans use a second screen for extra information such as statistics, to be the first to share news and – maybe more important – to interact with other fans on social platforms. Platforms that are ideal for live content and interaction. It seems a logical result that the supply of sports events shifts to online channels, there where fans are already active and interact with one another.

The fans and the market

The increase in number of suppliers in the market is beneficial to fans, since it gives them more choice and flexibility as to where to watch. The 10 NFL matches will, in addition to regular television-broadcasts, be free of charge for Twitter registered and non-registered users.

The total supply of sports content will increase and it will be easier to consume for sports fans. It is easier for organisations from smaller sports to reach fans and to offer live streams of all matches, even without a television contract.

It will be interesting to see the exact impact the new developments will have on the sports market. It may influence the sale and price of broadcasting rights. Television channels get competition from a market player that has other features to offer than just money, like online interaction with fans.
Social platforms also have the resources to target specific groups of fans and adjust supply based on interests.

In the end the beautiful thing about live video streaming is that everyone can produce content. A phone and you can share an interview, training or match on social platforms, there where the fans are active. The future will tell whether live video streaming on social platforms will really take off and whether it becomes the number one choice of consumption for sports fans.

An adjusted version of this article first appeared in Dutch on www.sportknowhowxl.nl.