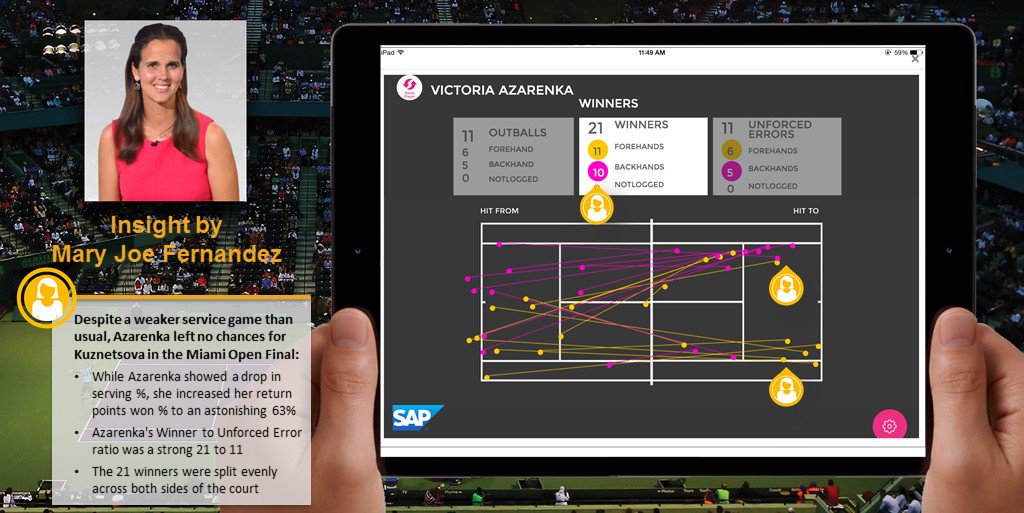 The partnership between the WTA and SAP fuels women’s tennis. Source: Twitter WTA

Since 2013 the Women’s Tennis Association (WTA) has partnered with German software firm SAP to bring women’s tennis to a higher level on and off the court. The partnership has led to the introduction of several innovations to improve the experience of players, coaches, media and fans.

So how has the partnership between the WTA and SAP fuelled the sport?

SAP has created an app around the WTA Finals – the year’s end tournament for the season’s best eight singles players and doubles pairings. The app brings fans closer to everything that is going on at one of the biggest tournaments of the year. It is designed so fans can have an engaging fan experience and can easily use it.

SAP’s app has features such as virtual reality, an online fan zone and a leaderboard based around key stats like aces and break points saved. 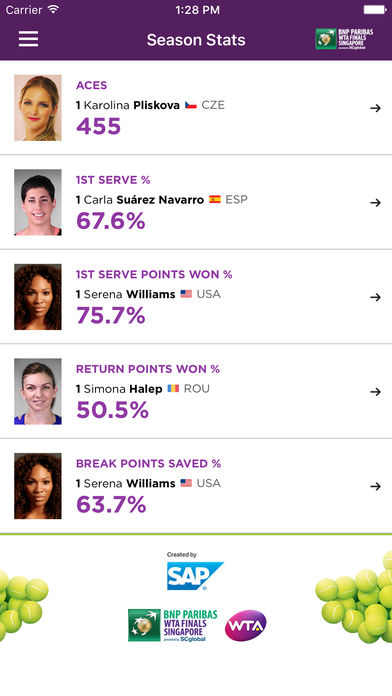 SAP has created the WTA Finals app with features such as a stats leaderboard. Source: iTunes WTA Finals App

SAP has also developed analytics software – SAP Tennis Analytics – that gives coaches access to in-match performance data. The tool was the first instance of real-time data during tennis matches for coaches and includes statistics such as general match statistics for both players and service performance. For the WTA-tour it perfectly complements the coaching rule introduced in 2008. That rules allows coaches to come on court to coach their players.

With the abundance of data that is collected these days it seems only logical that players and coaches can access such data at all times, including during matches. The coaching moments in the women’s game make it possible for coaches to really take advantage of the available statistics and compare it with their own observations. The idea being that is improves the level of the game, benefitting the fans.

According to the WTA’s CEO Steven Simon, SAP HANA allows the WTA to transform their business from a reactive service based organisation to a proactive content producing organisation.

In essence focussing on what tennis fans want these days: real-time insight into the strategies and numbers behind the matches and players.

SAP not the only software firm to fuel tennis

SAP is not the only software firm active in the tennis industry. IBM is another major partner of many tennis organisations and tournaments, including three out of four Grand Slams (the Australian Open is said to have terminated their long-lasting relationship with IBM this year). Both companies bring value to the tennis industry with features such as a second screen experience and real-time data information.

Since the start of the partnership between the WTA and SAP, technology has dramatically changed the (sports) world. Now it is a given that players and coaches have instant access to data around and during matches. While a few years back it was truly innovative. This shows how fast technology and everything related to big data develop. With the partnership the WTA has a partner by its side that can navigate this changing world so tennis can remain one of the biggest women’s sports.