The introduction of the International Premier Tennis League (IPTL) last year has diversified the tennis industry. The new tennis format offers fans an exciting and different product in December, a month that is traditionally the offseason in tennis, and to Asia, an undersupplied market. The IPTL is definitely a supplement to the existing products in the tennis market. Something we already analysed and concluded in last year’s article 4 business takeaways from the IPTL setup.

With the IPTL holding its second season from December 2nd till 20th, it will be interesting to see how the organisers handle the next phase. Similar to any other product, the IPTL goes through the product life cycle. This marketing theory describes the different life stages a product (with regard to sales and profits) experiences. Products generally go through four stages: introduction, growth, maturity and decline. (Kotler & Keller, 2009)
This article takes a look at how the IPTL handles the growth stage of the product life cycle.

From introduction to growth stage

The IPTL introduced their novel product last year and the concept is successful according to organisers and players. Morgan Menahem, part of the IPTL organisation, expects the teams to break even or make a profit this year. This would put the IPTL in the growth stage of the product life cycle. The league and franchises can now thus focus on strategies to realise rapid market growth.

One of the strategies in the growth stage is expansion, by means of entering new markets, new distribution channels and having new product models and features (Kotler & Keller, 2009). The IPTL is clearly trying to expand their market and their product. For the second edition, they have expanded the number of franchises from four to five. The Japan Warriors, spearheaded by Kei Nishikori, have been added to franchises from Singapore, Philippines, India and United Arab Emirates. With Japan the IPTL has entered a new market segment that has enormous potential, especially given the popularity of Nishikori in the country.

With the addition of the fifth franchise, the number of players participating has increased to 37. These 37 players were drafted by the franchises out of a pool of 80 candidates in a draft held in April of this year. The expansion has also increased the number of playing days by three and the number of ties. A slight change in format was required. Now the top two teams based on win percentage of all games played, will face of in the final in Singapore (last year the final leg was in Dubai).

After the launch of a product and its introduction stage, it is common for small problems to arise. These problems have to be tackled as the product matures and reaches the growth stage. One of the problems the IPTL faced were the poor attendance figures in Dubai. With just 14,000 people visiting over three days, the franchise had almost half the attendance figure of the other franchises. A lack of local marketing might have been the cause as many people were unaware the event was even being held.

These kinds of setbacks are, although unwanted, very common and characteristic for the introduction phase. All franchises, in particular the Dubai franchise and the rookie Japanese franchise, can only learn from this.

Another obstacle that presented itself was the lack of continuity. With yearly drafts it is possible that players play for different teams on a year-to-year basis. This makes it hard for the franchises to let fans engage with their team. Hence, some players are now drafted on a two-year deal. This gives continuity to the teams, which is beneficial for team achievements, fans and marketing activities.

The growth stage is characterised by new product features, improved styling and a change in marketing strategy (Kotler & Keller, 2009). The tennis product itself has not changed much, other than the expansion and subsequent adjustments discussed above. Styling and marketing strategy has improved upon last year. The IPTL website is more elaborate and everything can easily be found.

Regarding marketing the IPTL tries to engage fans, live in-stadium and online. Simple promotional activities such as a Twitter battle or polls asking fans which team is going to win this year are taking place. In the fanzone on the IPTL website the results are presented, including a map showing team support across the world. 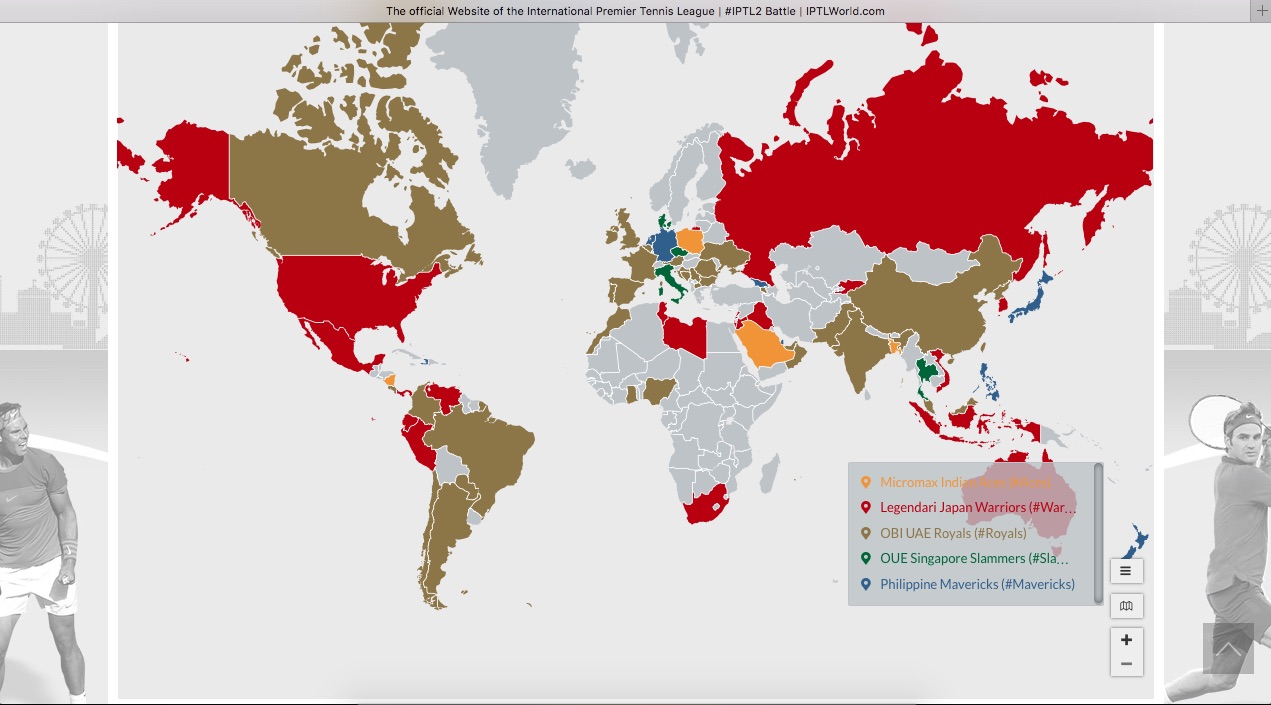 Breakdown of fans across the world. Source: IPTL

Another promotional activity is upgrade my seat. Fans have to take a selfie with their ticket and post it on Twitter or Instagram to have a chance to win a meet and greet with the players and possibly share the bench during a match. This surpasses just introduction of the product to the market. It rather aims for early adopters, those who already have a ticket, to spread the message by introducing the product to their own social media network. It is also just a fun, engaging and content-generating promotional activity.

Battle and promotion on social media

A lot of the (global) marketing activities take place online. The league and the five franchises all have their own website and social media channels. Some only have a Facebook and Twitter account; others are also active on other channels. Below a following overview (as of December 3rd) of the social media channels of the league and the five franchises: 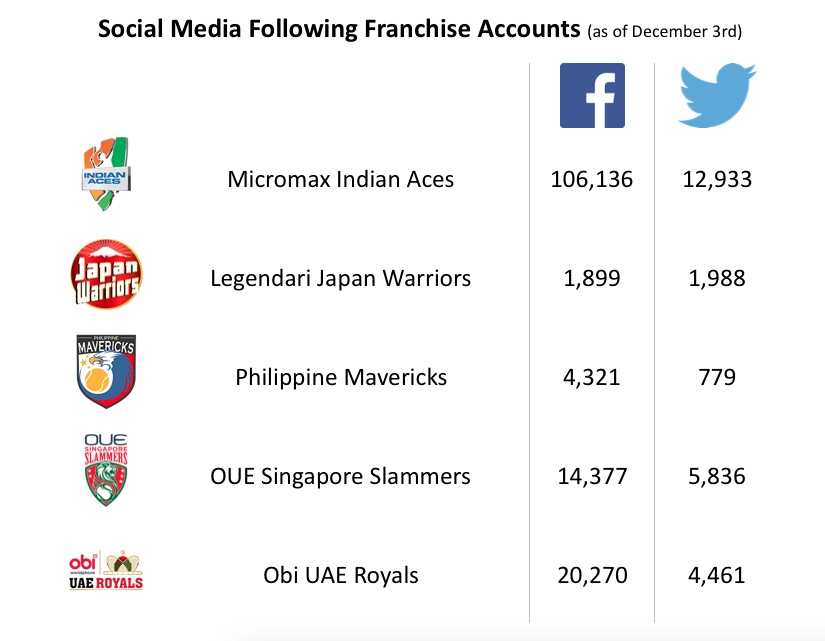 The winner of the first edition, the Indian Aces are also leading the pack on Twitter and Facebook. The numbers vary pretty dramatically. However, regardless of who is winning the social media battle or who is generating the most revenue, it is the growth of the league that is of primary concern. The franchises might be individually owned and owners (such as well known Amitabh Bachchan) might have spent considerable amounts, the IPTL is a revenue sharing closed league. All revenue is shared between the IPTL and the five franchises. So for example it does not really matter that the cheapest tickets in Dubai are around €58 (225.000 AED), while the cheapest tickets for the final leg in Singapore cost fans at least €130 (S$195). It will not influence the revenue distribution nor will it affect the competitive balance of the league. All this to make sure the IPTL grows and is here for the long term.

So in this article we have looked at how the IPTL, the league itself and the franchises, handle the growth stage of the product life cycle. It is clear they have made some adjustments to improve the product and we will probably see some more changes in the upcoming weeks and editions. Hopefully the growth stage will be long and prosperous, because the International Premier Tennis League is a nice supplement to existing tennis products.