How the NFL aims for globalisation of American Football 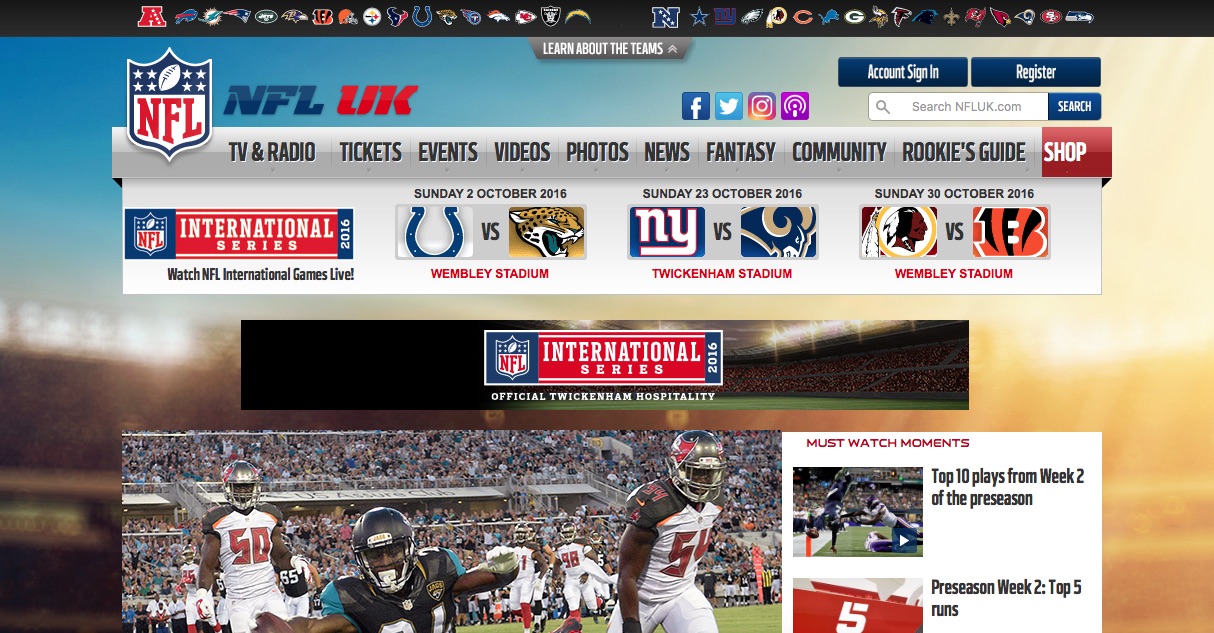 American Football is one of biggest sports in the US. The income of the National Football League (NFL) was projected at € 11,57 billion ($ 13 billion) last season. Many at high schools and universities also play the sport that is integrated in the American culture. Beyond the American borders the sport is less popular. In contrast to leagues such as the National Basketball Association and Major League Baseball, the NFL is not yet a global product and its income from international sources is relatively low. For years the NFL has been aiming for the globalisation of American Football, in particular to realise new sources of income. Over the years the organisation has invested a lot of manpower and money in this long-term project. So how does the NFL go about the globalisation of the sport and her own product?

In 2010 NFL commissioner Roger Goodell spoke out on the goal of increasing that season’s € 7,56 billion ($ 8,5 billion) income to € 22,25 billion ($ 25 billion) by 2027. A high target that requires finding new sources of income. Although the sale of broadcasting rights plays an important role, it is crucial to target new (foreign) markets to increase income.

NFL in the UK

Years ago the NFL already tried to target new markets for commercial success. Between 1991 and 2007 the NFL organised a competition that was mainly played by young players and took place partly or completely in Europe. Although NFL Europa has existed for a long time (under different names) it has eventually not become the success the NFL hoped for.

In 2007 the NFL started playing a regular season game in London under the name NFL International Series. By now the number of games has expanded to three per season and the NFL aims to have a team/franchise in the British capital by 2022.

The attendance figures have always been promising. Where at first it was thought that attendance figures would decrease as time went by and the newness of the International Series would go away, this was not the case. The three matches that were played at Wembley (London) last year had an average of 83 877 visitors.
This is of course a positive result for the NFL and gives hope that London can have a franchise in the future. Obstacles with transportation and local regulation remain however.

The NFL has so far limited itself to the UK, with the idea to first set up the infrastructure in this market and to use the results as blueprint for other international markets.

NFL in other countries

After almost ten years the NFL believes the time has come to expand to other countries. This fall Mexico City will host a regular season game, in addition to the three games in London. It will be closer to home for the Americans and thus have a lower (physical) impact on the players. It will also be easier and cheaper for American fans to make the trip.

Besides the Mexican and British market, the NFL hopes to hold a game in China in the near future. With a population of 1,3 billion people, China has an enormous potential market. But like the UK, China lies at a far distance from the US, causing all kinds of logistical problems.

With the expansion to these new (far) markets the NFL has to make choices. Becoming big in all countries is difficult and that is why the NFL focuses on key markets.
In an ESPN-interview earlier this year, Vice President of NFL International, Mark Waller, gave his view on the coming ten years: ‘I don’t think we’ll be big in 150 countries around the world. I think we’ll have a really powerful presence in six to 10 countries that are really critical globally. If we’re big in Canada, the U.S., Mexico, Brazil, U.K., Germany, China, Japan and Australia, we’d be in a great place.’

Foreign input in the NFL

It is mainly Americans who play in the National Football League. The input of foreigners is limited and those that are active in the NFL have oftentimes reached the competition via the American university system. It is difficult to reach the NFL outside of an American university or college.

Nevertheless, more often are international players able to reach the NFL via other routes. The draft of German Moritz Böhringer – who did not play at an American university, but played in the German league – is an interesting development that will probably give a boost to the German interest in American Football and the NFL.

These developments will, together with the NFL’s marketing activities in the international market, positively contribute to the organisation’s goals. Local interest in the sport will grow. More children will play the sport, increasing the size of the talent pool. Which can lead to more international players in the NFL in the future. And thereby arises a snowball effect that will constantly increase the popularity of American Football and the NFL.

The NFL realises that it is essential to use digital assets to reach (potential) fans and players across the world. One of the new digital developments the organisation has applied is livestreaming content, including matches.

Although the NFL receives a lot of income from the sale of broadcasting rights to television channels, the organisation has still chosen this route. Yahoo already live streamed a match last year. An indication of the € 8,8 million ($ 10 million) deal the NFL made with Twitter earlier this year, to live stream ten American Football matches this fall. The deal is a breakthrough in the use of digital assets to offer content to (potential) fans.
Because the matches are streamed free of charge and no identification is needed, the NFL has access to a huge potential market. This gives the organisation the opportunity to enter markets without locally playing matches or having a broadcast deal in place.

Another smart digital move to win over the British (and international) market is the creation of NFLUK.com: a separate website in addition to the original NFL website that specifically targets British (new) fans. Regular content – also found on the American website – is completed with articles and videos that introduce and explain the sport and the rules (see below). American Football is after all less known outside the US and this kind of content explains the sport to new and potential fans.

In general it seems that the National Football League is on the right track to realise set targets. Time after time the organisation tries to globally market her product and to generate more income. The NFL has set specific targets and wants to successfully enter international key markets. New projects in the coming years – like the NFL-Twitter deal and a regular season game in Mexico – will show whether American Football can indeed become a global sport and whether the NFL can commercially profit from it.