How do other sports deal with the World Cup? 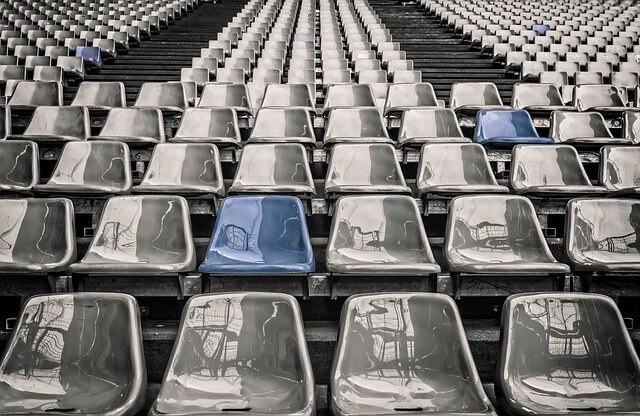 In a world where it is difficult to attract and keep people’s attention, how do sports (events) compete with an event like the FIFA World Cup?

The football tournament, held once every four years, is one of the biggest sports events around in terms of size and audience. The 2014 edition in Brazil reached a global in-home television audience of 3.2 billion people, according to FIFA, while an estimated 280 million people watched matches online or on a mobile device. So other sports events taking place in the same period have to compete with an event that is pretty popular, not just with respect to viewing numbers but also in terms of the amount of online buzz generated.

Do you compete directly with such an event if you are a smaller sport or sports event? Or do you adjust your schedule, wherever possible, and look for synergies to take advantage of the World Cup’s popularity?

The Wimbledon men’s final and the FIFA World Cup final both take place on July 15 this year. Although the Wimbledon final starts two hours before the spectacle in Russia, the overlap will certainly be a concern for the Wimbledon organisation and broadcasters of both events.

According to reports, broadcasters contacted FIFA about the kickoff time, noting that it is an uncommon European time to kick off and that the semi-finals take place in the evening. However, FIFA would not budge as it takes into account the convenience of the worldwide market.

Wimbledon are probably not happy with the inconvenient schedule either, but there is little they can do when they want to keep their traditional match time, other than hope the final finishes before the start of the World Cup final or is of such high intensity and quality that people will not switch to football.

An opportunity, rather than a threat

In 2016, the Wimbledon final also clashed with other sports events: the final of EURO 2016 (football) and the British Grand Prix (Formula 1). Wimbledon predicted that this could have led to a 10 to 20 percent drop in engagement across its digital channels. However, the organisation partnered with UEFA – organiser of EURO 2016 – to promote each other’s events and they used partner IBM’s technical solutions (e.g. cognitive social media analytics) to draw in other sports fans.

‘The focus on using cognitive social media analytics to engage with potential fans outside of the tennis community was a good way to convert the overcrowded sporting calendar from a risk into an opportunity,’ said Alexandra Willis, Head of Communications, Content and Digital at the All England Lawn Tennis Club (AELTC).

‘For example, when we saw that Liverpool Football Club had sent good luck messages to Caroline Wozniacki (who is a big Liverpool fan), we followed up with some football-related tweets to encourage that audience to visit our site.’

The dip in engagement did not come; the record-breaking performance of the previous year was even maintained. So when clashes cannot be avoided – due to tradition or because it is out of your control – the situation has to be approached in such a way that a risk turns into an opportunity. In addition to overlapping in scheduling, you have to find overlapping content so football (or other sports) fans can be drawn in.

In contrast to Wimbledon, Formula 1 did make several changes to its schedule to avoid clashes with the 2018 FIFA World Cup. In a bid to avoid the World Cup final weekend, for the first time Formula 1 will race in three consecutive weeks. A logistic and personnel challenge for the teams involved. The start time of the French GP was also pushed back by an hour in comparison to the usual European F1 time schedule to avoid a clash with England’s second World Cup match.

When tradition is not as important as it is for Wimbledon, schedule changes are a relatively easy solution to a one-time problem. The effects on the sport itself and its fans are not that severe.

Like Wimbledon and many other (sports) organisations, Formula 1 also tries to benefit from all the social media chatter around the World Cup and to jump on any trending topics or crossover content. For example, the Formula 1 Twitter account tweeted: ‘Big day for Honda … First an engine deal with Red Bull, then an assist for #JPN [Japan] in the #WorldCup’.

Football clubs have an easier time of course. Apart from maybe some playoff matches and preseason games, they have no overlapping schedule with the World Cup. So they do not have to compete with the tournament, but they can benefit from the content and social buzz the event creates. In a normally low-activity period on social platforms for them, they can now jump on the chatter around the competition and create content around (their) players active at the World Cup to keep their fans engaged between seasons.

The size and popularity of the World Cup offers an opportunity for other sports (events) and football organisations to benefit from the buzz. Of course, scheduling clashes can seem like a threat to your event, but approaching it as an opportunity like Wimbledon did with EURO 2016 can lead to new opportunities and new fans.