A ‘Grand Slam Dunk’ or not so much?

The man and woman winning the Australian Open this weekend will have a great start to a long season. But what does winning Down Under say about the chances of winning at the other Grand Slams? Score and Change conducted a small research about just that. How did the Australian Open winners from the last two decades perform at the three other Grand Slams that year? An interesting find, that does not precisely predict what this year’s winners will do at the French Open, Wimbledon and the US Open, but it does give an indication of what their chances are. 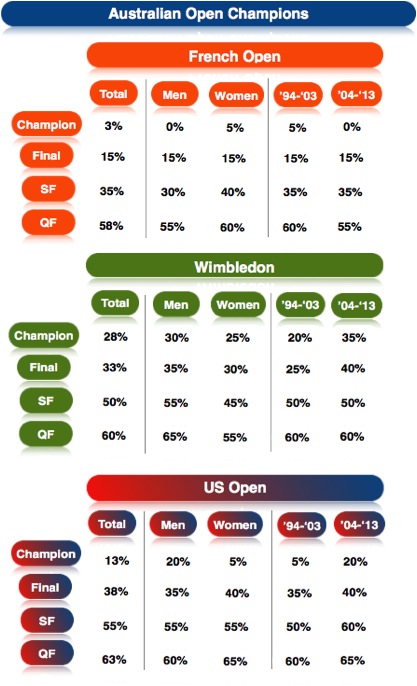 Chances at Roland Garros, Wimbledon and the US Open after winning the Australian Open

The research covers the period 1994 till 2013. In these two decades the Australian Open has had 10 different men champions and 12 different women champions (see table of champions at the bottom of the post). The 22 different tennis champions have had a combined 120 possibilities to shine at the other Grand Slams. Our champions were crowned at 17 other Grand Slams when they had won the Australian Open. Three different players – Roger Federer (on three occasions), Novak Djokovic (once) and Martina Hingis (once) – even won two more Grand Slams, while none were able to reach a real ‘Grand Slam’. In all cases the French Open prevented them from reaching that magic goal, although Federer and Hingis were both close as runner ups.

Almost, not at all and the ‘big four’

14 percent of the time our champions drew the short straw in the final, just as often as they were crowned champions. Unfortunately 13 times our champions had to withdraw before the tournament even started. From the three Majors this happened mainly (62%) at the US Open, the last Grand Slam of the year. A long season might be the cause of this. Yet a 1 in 9 withdraw ratio seems pretty reasonable.
The last decade (2004-2013) we have been able to watch the ‘big four’ – Federer, Nadal, Djokovic and Murray – in men’s tennis while women’s tennis saw more variation apart from a, at times, superior Serena Williams. The ‘big four’ won 9 out of 10 Australian Opens in the last decade while Serena Williams won the Australian Open four times (once in the decade before). However, their domination does not set this decade apart from the one before in how often our champion’s reached the last four, as this happened 50 percent of the time in both decades. The domination by Roger Federer for several years and Djokovic’s fantastic 2011 season did affect how often Grand Slams were won. In the last decade this happened 11 times, while just 6 times in the decade before.

From Hard Court, to Clay, to Grass, to Hard Court

Different surfaces do have an impact on performances. Making the assumption that winners of the Australian Open are not too shabby on hard court it can be reasoned that these players will perform better at both the US Open and Wimbledon (fast surfaces) than the French open. The numbers indeed seem to support this.
Although our champions reached at least the quarterfinal 60 percent of the time at all three the Majors, differences can be observed when it comes to reaching the final four or even the final. Our champions reached at least the semifinal at Wimbledon and the US Open respectively 50 and 55 percent of the time. Yet only 35 percent of the time they reached the last four on the red clay of Roland Garros. So our champions definitely belong to the top and generally perform well on all surfaces, but (having a real shot of) winning the French is just a more daunting task.

Battle of the sexes

Our men and women champions reached the quarterfinal and beyond at the other Slams just as often, both 36 times. However, differences can be observed between Grand Slams. The women performed slightly better (as in they reached the QF and beyond more often) at the French Open and the US Open than the men, while a higher percentage men reached the last 8 at Wimbledon. That the men have performed slightly better at Wimbledon can be contributed to some great grass players – such as Pete Sampras and Roger Federer – dominating men’s tennis for several years. Yet the similarities between the different sexes’ overall performance is remarkable. Only slight difference can be observed.

The numbers show minimal differences between performances at the different majors after winning the Australian Open. There is some variance between men and women and between the last decade and the one that proceeded. The data shows that the 2014 Australian Open winners will approximately have a 60 percent chance to reach the last eight at each of the other majors. But winning Roland Garros is a far more daunting task than winning any of the other Grand Slams.