Geo-targeting: the websites of the richest football clubs

Football clubs’ fan bases are enormous and constantly growing. Clubs like Real Madrid, Chelsea and Juventus have fans all around the world. In order to keep growing, clubs need to engage with these fans and offer them content they can consume. It is therefore essential to localise the global marketing efforts and apply some sort of geo-targeting.

Geo-targeting is needed to better connect and engage with a diverse global fan base. At the same time it is needed to grow the fan base and raise income from it. When looking at the top 10 richest clubs (based on Deloitte’s Football Money League), it is Manchester City that has the most language options on their website with 13. Barcelona follows with nine. 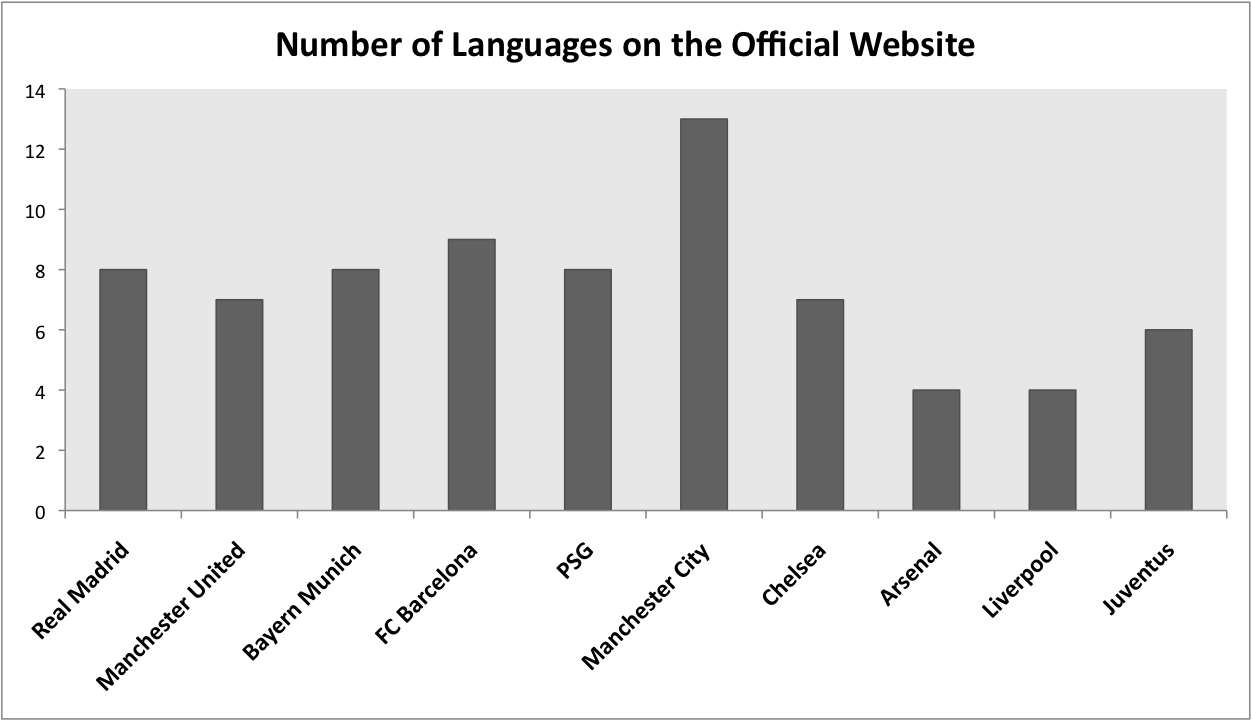 Number of languages the top 10 richest clubs offer on their official website.

All ten websites are available in English and Chinese. While all but one (Liverpool) offer their website in Japanese. The translation into many Asian languages (Chinese, Japanese, Korean, Indonesian, Thai and Malay) can be explained by the huge potential and size of the Asian market.

Three clubs (Bayern Munich, Manchester City and Chelsea) offer their website in Russian. For Chelsea this is the only other European language besides English. This can of course be attributed to their Russian owner Roman Abramovich. The other five languages are all Asian.

No club offers their website in German, except German ‘Recordmeister’ Bayern Munich. Bayern also offers content in the ‘local’ language Bavarian, just like Barcelona does in Catalan.

It is interesting to see that Arsenal’s website is not translated into French. Despite that they have a French coach and multiple French players. They also do not offer their site in Arabic, while their main sponsor Emirates Airline is from Dubai. Six other clubs do share content in Arabic.

During the online Hashtag SportsConf 2015, Liverpool’s Chief Media Officer Matthew Baxter underlined the importance of adjusting global marketing efforts to local markets. He mentioned Liverpool’s diverse audience across the world and how the club has “established local language websites, local social media, done by local teams in local countries and local markets at local times”. Although Liverpool offers the least amount of languages on their website with four, they do communicate with their global fans in 27 different languages across multiple social networks.

In addition, Liverpool has launched the website LFC Xtra. According to Baxter “a global website in the English language but it’s very targeted, geo-targeted to areas and specific English speaking territories, like USA or Australia”. LFC Xtra is seen as a “very good entry mechanism” to develop fans around the world into hardcore Liverpool fans.

Marketing efforts targeting North America has gained popularity in recent years. Many clubs use pre-season to grow their brand in those territories. This summer Manchester United, PSG, Barcelona and Chelsea will all participate in the International Champions Cup to be held across North America.

These trips are a nice supplement to the websites and social networks geo-targeting these areas. In addition to Liverpool’s LFC Xtra, several other clubs have separate landing pages for North American fans.

Bayern Munich opened an office in New York last year to accompany their expanding marketing efforts in the US. They offer American fans a separate website and official webshop.
Arsenal also has a website for Americans and Canadians, where they offer content that is geo-targeting the area. On the website they share information about when and where to watch the games and about local supporters clubs. In addition, they have an Arsenal Store USA.

The richest football clubs needed to adjust to globalisation and the Internet. They now offer content in multiple languages to engage the growing fan base that is spread across the world. Engaging fans via websites and social networks in multiple languages costs resources and time. So it is natural that clubs have a limited number of languages on their website and social networks. However, it would be interesting to know why clubs offer their content in some languages while foregoing others.