GearGeek knows what equipment your favourite NHL players use

GearGeek.com is an online NHL player equipment database for ice hockey players, fans and gear fanatics. It keeps track of the equipment being used by every active NHL player: sticks, gloves, pants, skates and helmets. We interviewed the people behind GearGeek to find out more about the online tool.

Q. Could you give me a bit of background on GearGeek.com? Why did you think there was a market for this kind of website? And who are involved?

A. The idea for GearGeek.com was originally conceived by long time hockey player, fan and gear fanatic, David Duerr.

We knew that there would be a market for this type of website because of the number of gear fanatics in groups on Facebook and on several websites dedicated to pro stock equipment. These fans were somewhat keeping track of players changing equipment, but the information wasn’t easily accessible or organised and presented in a professional way or well designed and intuitive website.

GearGeek has a few employees that update and maintain the website, plus several active volunteers that help keep GearGeek up to date with equipment changes. We’ve also tried to make it as easy as possible for our viewers to suggest an update if they see equipment changes. 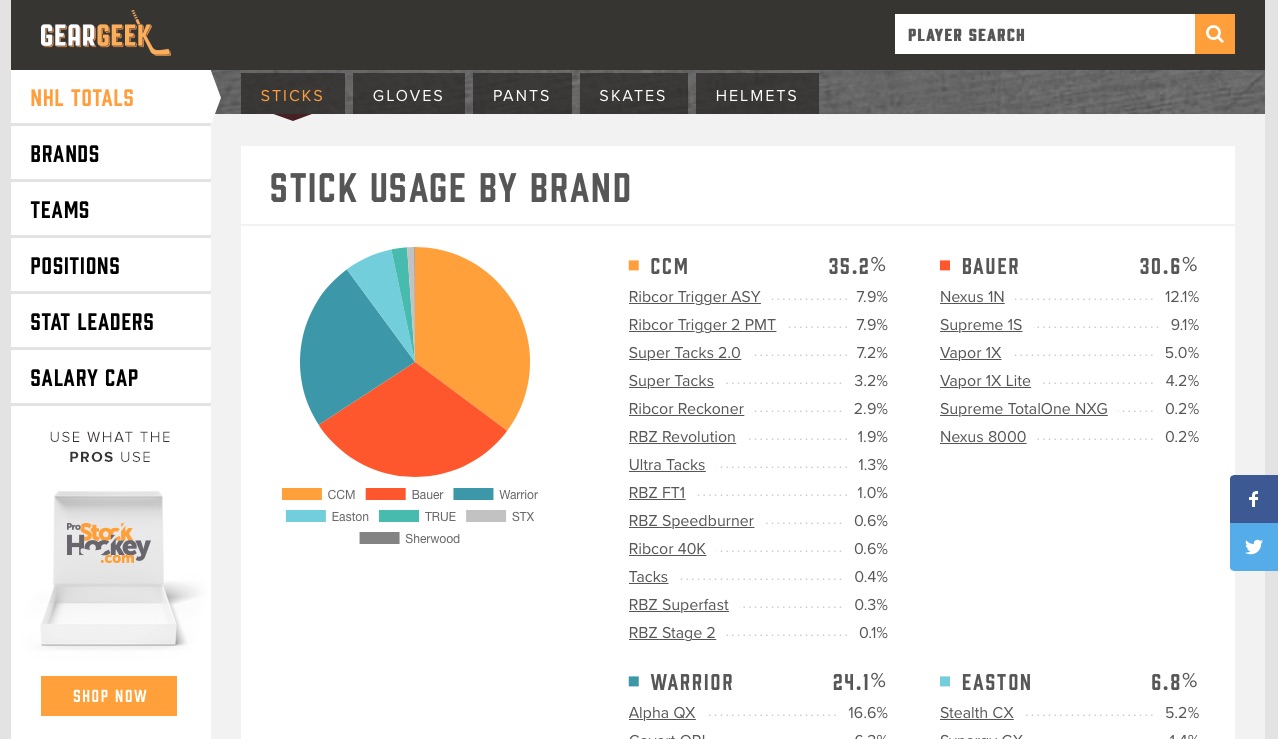 GearGeek.com keeps track of the equipment being used by every active NHL player: sticks, gloves, pants, skates and helmets.

How do you market GearGeek.com?

We’re active on social media, we’ve reached out to hockey writers to notify them of this brand-new tool at their disposal and we’ve tried to leverage our partnership with ProStockHockey.com to reach individuals that might have an interest in this information.

The GearGeek database is updated daily. What are some of the challenges with delivering on this promise and running the website in general?

There have been several challenges along the way. Shot blockers have become more popular, so it’s not always easy to tell which gloves players are wearing. There are several players that were switching between models and brands at the beginning of the season – some were even switching during games! There are also a couple of players on the Golden Knights that are using different brands of gloves for home and away games.

What lessons have you learned along the way?

We’ve learned that there are a wide variety of people looking at our site. Some are highly knowledgeable, but others…well…not so much. Each suggestion we receive needs to be double-checked for accuracy.

Another thing we’ve learned is that the gear used in the preseason definitely does not correlate to the actual season. The number of changes that needed to be made during the first week of the season was shocking. On average there were about 10 changes per team that needed to be made…it was a busy week!

As the NHL is a North American league the majority of your visitors are probably from North America. What are some other regions GearGeek visitors come from?

We see traffic from people all over the world! There are tons of dedicated NHL fans and hockey fans throughout Europe and into Asia that appreciate what we’re doing. It’s really cool to see.

How did you set up the partnership with ProStockHockey.com and what does it offer to both parties?

ProStockHockey.com is obsessed with pro gear so to create and sponsor GearGeek.com was a natural. PSH provides a lot of the photos of equipment and is very active in spreading the word about GearGeek!

We like to think of GearGeek as not just a “cool site” but also as resource of information that hockey players and parents can use to make smarter buying decisions. You can see what products are being used by the best players in the world, then go and actually buy those products from ProStockHockey.com!

What plans does GearGeek have for the future?

For now we’re just focused on hockey equipment used in the NHL by the best players in the world. GearGeek started because of our passion for hockey and for hockey equipment – the goal was more driven by our obsession with hockey gear and who uses what then anything else.

What advice would you give to people starting out in the sports market?

Just be passionate about what you’re doing and try to engage with anyone who takes an interest in your website or business. People can tell when something is done half-heartedly so, if you truly want to make a career in the sports market, you need to put in a lot of hard work.

Another piece of advice would be to try and form relationships with people already in the industry. Start small, earn your opportunities and build your resume. There’s a lot to learn in the world of sports – it feels like we’re learning something new every day.