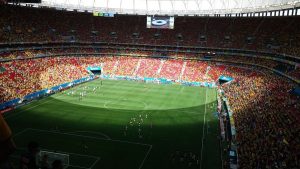 Host country Brazil opened the Confederations Cup 2013 with a 3-0 win over Japan last Saturday. In this two-week event Brazil,  both the organization and ‘a seleção’, can show the world they are ready for next year’s FIFA World Cup. During the Confederations Cup eight participants compete over two weeks to win $4.1 million USD.

The eight participants are, with the exception of host Brazil and EURO 2012 runner-up Italy, all winners of their respective continental competitions. Below you can find an overview of the group stage.

In February FIFA announced that the Confederations Cup’s prize money is up by 14 percent to $20 million (USD). 20 percent ($4.1 million) will go to the winner, while the runner-up receives $3.6 million. All eight nations, including Tahiti, are guaranteed $1.7 million. Quite a high amount, so how can FIFA award this?

The possibility to award these amounts of money will partly be due to a great three-tier sponsor scheme FIFA implemented after the FIFA World Cup 2006. FIFA has six fixed partners: Adidas, Coca Cola, Hyundai-Kia motors, Emirates, Sony and Visa. These partners make up the first tier and are involved in many of FIFA’s events. Eight lower level sponsors, including Budweiser, Castrol and Yingli, are allowed to make an association with FIFA’s World Cup and Confederations Cup on a global level.

The sponsors are diverse

The third tier is on a national level and consists of National Supporters. These sponsors have exclusive marketing rights within the country. The last added National Supporter for the Confederations Cup 2013 and World Cup 2014 is Centauro, a large sports retailer in South America. Centauro alone is expected to invest over $50 million USD in the market around the two events. Interesting is that the National Sponsors are diverse, the other five being in sectors as trade and investments, insurance, banking, confectionery and language schools.

It is this diversity (and exclusivity) that may be the biggest strength of FIFA’s sponsorship structure. Due to heavy competition between potential sponsors FIFA’s sponsorship sales are rising. FIFA seems to benefit extremely from these lucrative deals. And although we know on June 30th which nation won the World Cup dress rehearsal, it will take years before the National Sponsors know whether their investments paid off.