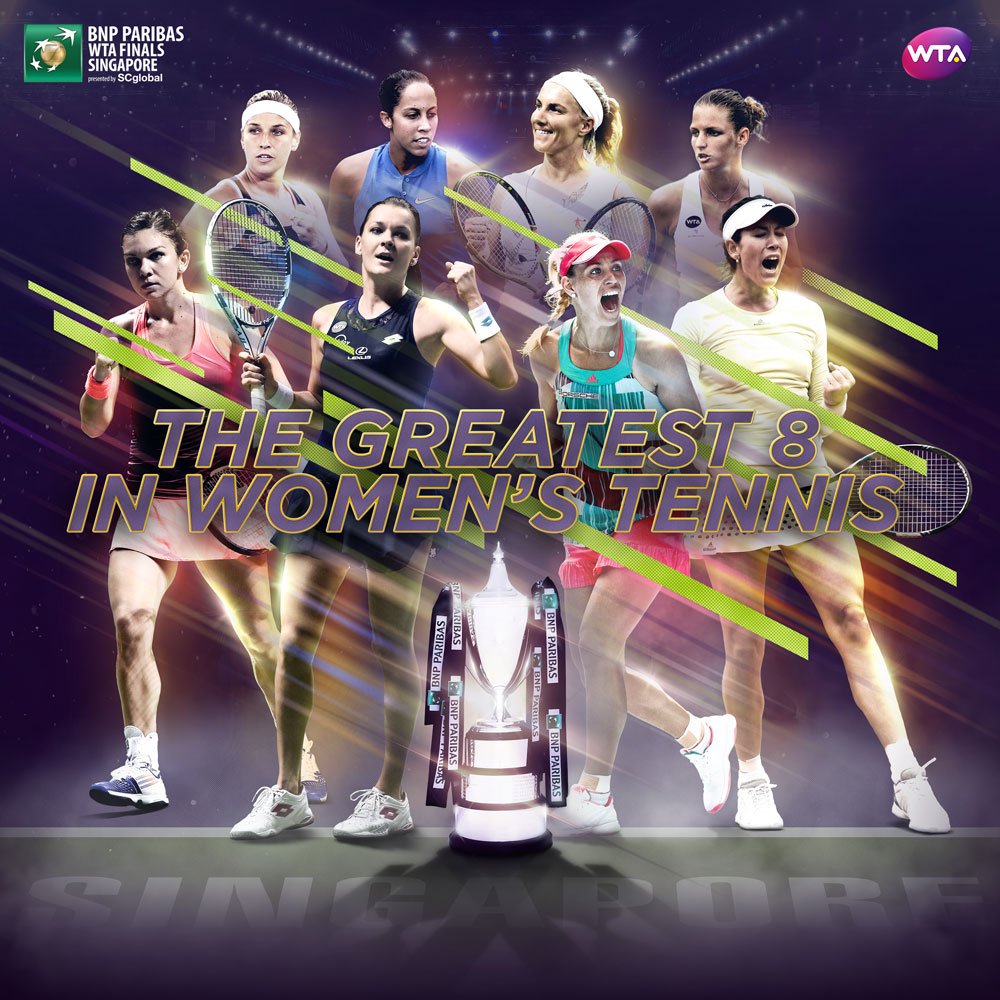 With the 2016 WTA Finals Singapore taking place this week, this year’s Road to Singapore has reached its final destination. With only one non-European player (Madison Keys) playing in the WTA’s showcase tournament, it is almost a European affair. Noticeable absentees are Serena Williams (injury), Maria Sharapova (doping ban) and Victoria Azarenka (injury and pregnancy).

Yet world number one Angelique Kerber, Grand Slam champions Svetlana Kuznetsova and Garbiñe Muguruza and Simona Halep are just four of the exciting players battling for the WTA Finals honours. Some are more popular, while others have won more over the years. Below a comparison of the Final 8 based on digital presence, sponsors and prize money earned.

Today, top athletes need a digital presence to communicate with their fans and to be of extra value to sponsors. Remarkably only five of the Final 8 – Kerber, Radwanska, Pliskova (with her twin sister), Cibulkova and Kuznetsova – have their own updated website. The websites have standard elements such as links to social media channels, match schedules and an overview of sponsors.

When it comes to social media, all the players are active on multiple platforms. Ahead of the WTA Finals (October 22), it is Simona Halep who leads in number of Facebook followers (1,3M). Garbiñe Muguruza has the most Instagram followers (295K), while world number one Kerber is the most popular on Twitter (259K). 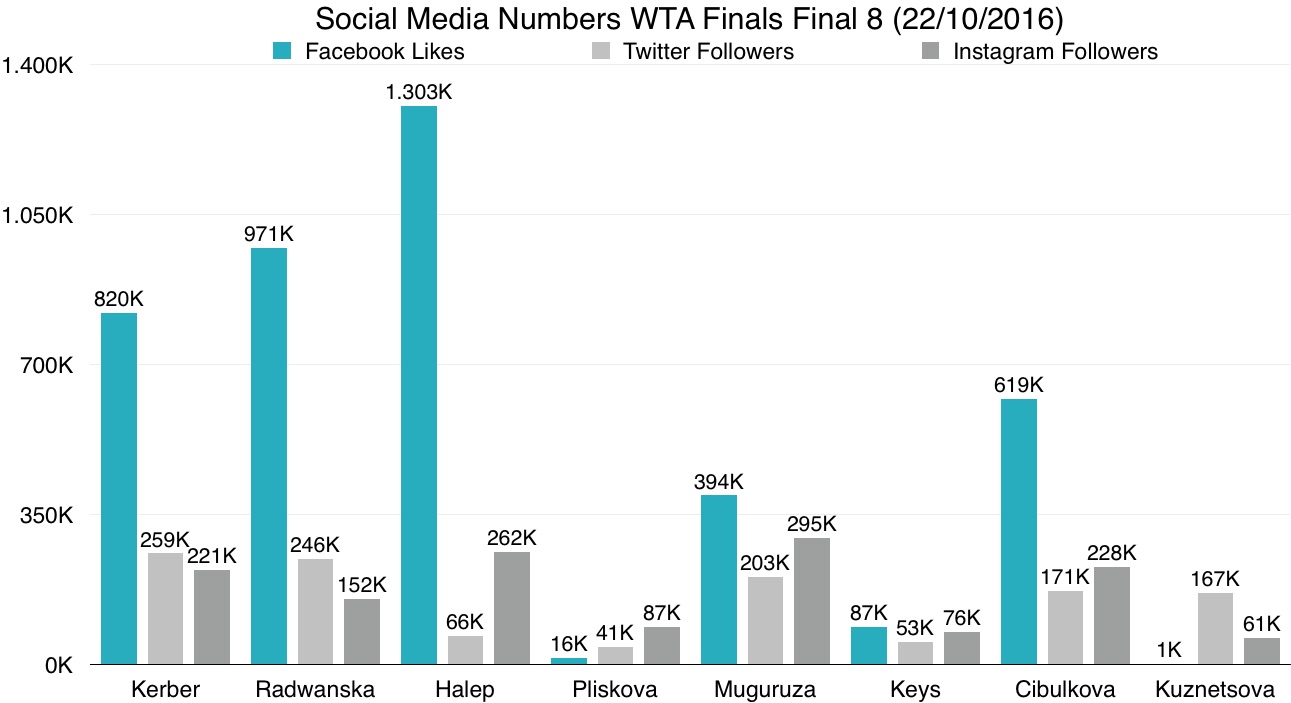 Facebook seems to be the platform to go to for fans, as the majority of players have the most followers on this platform.

Pliskova and Keys are relatively new to the top of women’s tennis and their low online following can therefor be explained. Kuznetsova’s smaller following is more puzzling since she has been a pro since 2000. It could be caused by her inconsistent results in previous years.

Muguruza might only have turned pro in 2011 (the latest of the Final 8), but she has a reasonable online following. Her winning a Grand Slam this year has definitely boosted her brand and online popularity.

Although Muguruza does not have a website, she did launch her own app earlier this year. She is one of several players (Sharapova, Nishikori) who have their own mobile app. The app provides live video streaming, live chats, VIP access, her favourite music, her personal thoughts, personal messages and much more. It is a great alternative to a website and will certainly be done by more athletes in the future.

Cibulkova has quite the following across the different social media channels. She has her own YouTube (and no longer active Vimeo) channel where she regularly posts (go pro) footage of her training sessions. A neat personal website and a separate website where she sells her own collection. The Domi Collection consists of clothing for men, women and kids and also some accessories, like an iPhone cover.

Five different clothing brands sponsor the eight women: Adidas (3 players), Nike, Lotto, Fila, Lacoste and Qiaodan. Adidas and Nike are no surprise. Fila added Pliskova and several other players to their portfolio at the beginning of the year.
Qiaodan is the real outlier. The Chinese brand has sponsored Kuznetsova since 2013, but is not without controversy. It has been in lawsuits with Michael Jordan as it is perceived as a knockoff of the popular brand.

All of the major racket brands, except for Prince, are represented at the WTA Finals. Half of the players play with a Babolat racket, while Kerber plays with Japanese brand Yonex and Kuznetsova plays with Head. Wilson sponsors the tournament and also has Halep and Keys in their portfolio.

Several players also display other partners on their clothing. For example the logo of automobile manufacturer Porsche can be seen on Kerber’s outfit, while Radwanska has Lexus and Workday on her outfit.

Top tennis players can amass millions of dollars in prize money during their careers. Although this is by no means a representation of their true wealth, given the many costs associated with playing and travelling, it is an indication of a player’s success since turning pro.

Pliskova and Keys, both pro since 2009, have the least amount of career prize money with $6,4 million and $4,9 million respectively. Muguruza only turned pro in 2011, but she has amassed more than $9 million already, with a third of that amount coming in 2016.

For Pliskova and Kerber 2016 has been the most successful regarding prize money. Pliskova earned 54% of her career prize money so far in 2016, while Kerber earned almost half (49%) of her prize money this year. The roughly $8,7 million Kerber earned this year has come, among others, from her two Grand Slam titles and Grand Slam finale. She earned more than double the amount Pliskova amassed this year – who comes in second from the Final 8 – and even more than the $7,7 million Serena Williams earned this year.