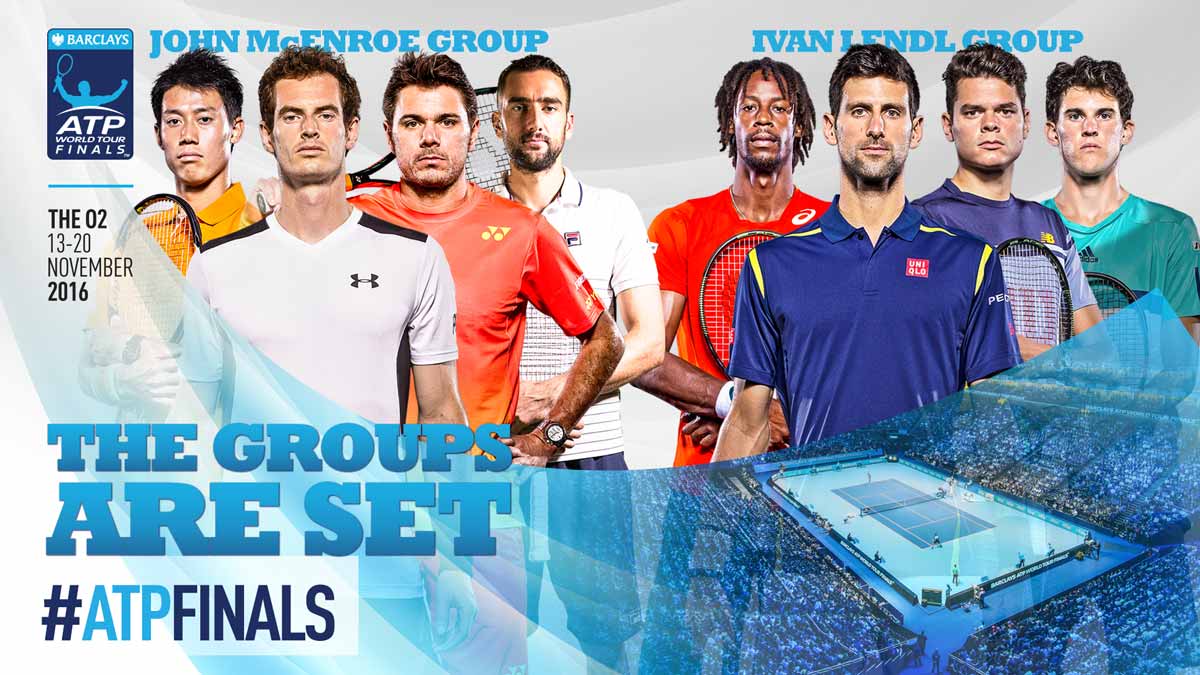 The 2016 Race to London has reached its final destination at the O2 Arena in London. In the coming week eight men will compete to be crowned champion of the Barclays ATP World Tour Finals.

Among the players there are 19 Grand Slam titles, with the majority (12) won by Novak Djokovic. Andy Murray and Stan Wawrinka each have won three majors, while Marin Cilic won his only Grand Slam in New York in 2014. Canadian Milos Raonic and Japanese Kei Nishikori – the only non-European participants – have yet to win a Grand Slam, despite having both reached a Grand Slam final. The field is completed by World Tour Finals debutants Dominic Thiem and Gael Monfils.

Below a comparison of the eight players based on digital presence, sponsors and prize money earned.

It is no surprise in this day and age that all players are active on various digital platforms.

Except for Monfils and Thiem, all players have a personal website to keep fans up to date with the latest news, to show off their sponsors, to link to other digital channels or to promote their own web shop (Djokovic and Wawrinka). The websites are available in the players’ native language and in English.

It is interesting to see that several players also have a Sina Weibo account. The Chinese social media platform gives players as Murray, Djokovic and Cilic a direct platform to engage with this large group of fans. Djokovic is even active on a second Chinese platform.

Wawrinka and Raonic do not specifically focus on the Chinese market, but they both have an account on Snapchat. A social media platform that many tennis events, like Wimbledon and the Australian Open, are also using.

When it comes to popularity across social media, it is Djokovic who easily tops the other Tour Finals players. The Serbian has 16,8 million followers across Facebook, Twitter and Instagram. That is double the amount Murray has on those platforms.

Djokovic is by no means the most popular players on the men’s tour. Injured Rafael Nadal and Roger Federer have 28,6 and 23,2 million followers respectively across the three platforms.

Austrian Thiem has a relative low amount of followers, but given that he is new at the top of the men’s game, this is no surprise. His popularity will only rise in the coming years. Yet the relative low numbers for Grand Slam winner Cilic on Facebook and Twitter (he has no Instagram account) are surprising.

Djokovic and Nishikori have both launched a mobile application to give their fans even more insight into their lives. The apps provide such features as live video streaming, live chats, VIP access, favourite music, personal thoughts, stats and much more. It is a great supplement (or alternative) to a website and it perfectly fits the habits of the modern sports fan.
Although Nishikori’s app is free to download, it does have a subscription fee of $5,99 per month or $54,99 per year for All-Access Membership.

Surprisingly Adidas’ competitor Nike has no player in their portfolio that will play at this year’s World Tour Finals. Nadal, who has long been sponsored by the American brand, did qualify, but injury keeps him from making an appearance. Nike’s other headline-man Federer is also injured.

When it comes to equipment, well-known brands are represented. Wilson and Head both sponsor three players, while Head is also a silver partner of the ATP World Tour Finals. Thiem is the only one playing with Babolat, while Wawrinka is the sole Yonex-player. The Japanese brand also provides Wawrinka’s clothing.

The players have multiple partnerships beyond clothing and equipment. Some of these partners are also visible on their clothing. For example the logo of automobile manufacturer Peugeot is visible on Djokovic’s outfit, while Murray often has a logo of investment company Standard Life on his shirt.
Jaguar (Murray and Nishikori), Nissin (Nishikori), Fromm (Wawrinka), Jacob’s Creek (Djokovic) and Aviva (Raonic) are some of the other companies who have partnered with these players.

Besides having a brand on their clothing, a couple of players have their own personal logo on there as well. Djokovic and Murray, but also absentees Federer and Nadal, have their own logo on their shirts and/or shoes. The logos are often based on the players’ initials (see this article to know more about personal logos in men’s tennis).

Novak Djokovic has earned $104,9 million since he turned pro in 2003. That makes him all-time leader in amount of career prize money. It is almost double the amount Andy Murray has amassed ($53,3 million) since turning pro in 2005. It is also four times more than Wawrinka has earned so far in his career.

Although this is by no means a representation of their true wealth, given the many costs associated with playing and travelling, it is an indication of their success since they turned pro.

Only the injured Federer comes close to what Djokovic has earned in career prize money with just below $99 million. Nadal is still far-off with $78,7 million.

Thiem, pro since 2011, has the least amount of career prize money of the ATP Tour Finals participants with $4,5 million. However, 53% of that was won this year.

Murray and Djokovic earned the most so far this year with $10,9 and $11,4 million respectively. That is around double what number three Wawrinka earned during that time. Following Wawrinka is Raonic, who earned $4,1 million this year – a third of his career prize money since turning pro in 2008.

Prize money and number of social media followers vary greatly among the ATP Finals players. Murray and Djokovic clearly lead the field. Together with Federer, Nadal and (to a lesser extend) Wawrinka, they have dominated tennis in the last decennium. Something Murray and Djokovic will try to do once again in London when they battle for the world number one spot.