Breaking down the kit sponsors at EURO 2016

The 2016 UEFA European Championship takes place in France from June 10th till July 10th. It is only one of the many exciting sports events this summer. The tournament has expanded to 24 teams from the previous format of 16. Five nations – Albania, Iceland, Northern Ireland, Slovakia and Wales – make their European Championship debut.

Having more nations involved, likely has a positive effect on the enthusiasm of football fans. At least it will in the rookie nations. Sponsors will tap into this enthusiasm with online and offline sponsorship activation.

Apparel companies sponsoring participating nations can also tap into this excitement. After all fans see the brands displayed on the kits.

Seven different clothing brands sponsor the 24 teams competing at EURO 2016. Erreà, Joma, Macron and Umbro each sponsor one nation. They compete for attention with major brands Adidas, Nike and Puma. 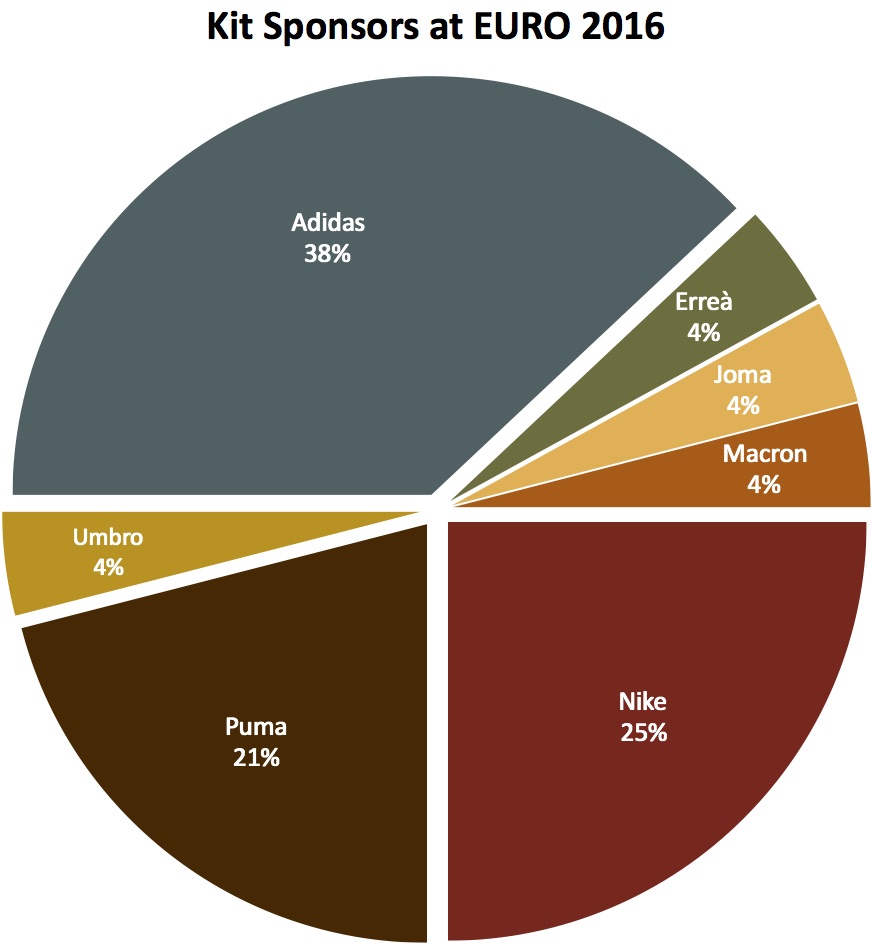 Up-and-coming brand Under Armour is not yet active on the international football stage. They are expanding their football portfolio with players and clubs. They just signed an agreement with English Premier League team Southampton. But the brand is yet to strike a sponsorship deal with a national team.

Adidas sponsors two EURO-debutants with Wales and Northern Ireland. While Italian brands Macron and Erreà each sponsor one new comer with Albania and Iceland respectively.

Adidas sponsored teams compete against each other in 5 of the 36 group stage matches. The same number of times American sponsor Nike will come up against Puma. 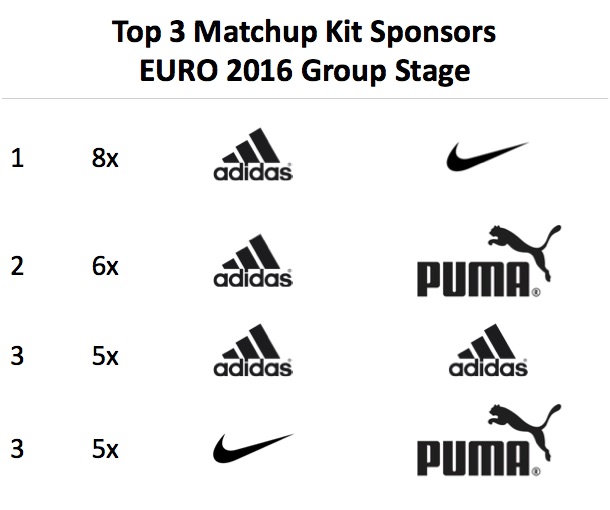 At the 2012 European Championship there were just four different kit sponsors. Three brands less than the seven represented this summer. Expected given the eight-team expansion for the EURO 2016.

Adidas, Nike, Puma and Umbro were the only kit sponsors in Poland and Ukraine in 2012. Umbro sponsored 3 of the 16 nations four years ago. They lost two sponsorship deals to big market players. England switched to Nike in a five-year deal in 2013, while Sweden switched to Adidas in the same year.

The World Cup has a 32-team format. At the 2014 World Cup in Brazil there were eight different kit sponsors. Again more teams, more sponsors, including some smaller brands. For example Ecuador wore Marathon, an Ecuadorian brand. Burrda sponsored quarterfinalist Belgium. The brand was unable to hold on to the Red Devils who switched to Adidas after the World Cup.

It is clear that Nike, Adidas and Puma dominate kit sponsorships at major international football events. Nike sponsored the most teams during the 2014 World Cup, ahead of Adidas and Puma. But this summer it is Adidas that dominates in the French football stadiums.