Brands Nike and Adidas dominate on the elite sports pitches

When you think about the market of sports brands your mind immediately recollects Adidas and Nike, maybe followed by Asics, Puma and a particular national brand. Nike and Adidas are market leaders in the global sports apparel industry. In 2012 Nike Inc. reported $24.1 billion revenue. Meanwhile Adidas AG had reported revenue of €14.9 billion, roughly $19.8 billion. The question is whether both brands’ dominance off the pitch also exists on the elite sports pitches. What brands are top tennis players, football clubs and Olympic teams wearing?

When you analyze the top 20 European clubs it can be observed that Adidas and Nike are the dominant players. Together they sponsor 18 of the 20 best European clubs. Ten clubs are endorsed by Adidas, while eight clubs wear Nike kits. Joma (Valencia) and Puma (Borussia Dortmund) are the only other brands to sponsor a club.

A similar picture emerges when examining the top 20 World Football Nations (see figure below). More brands are present, but Nike and Adidas, together with Puma account for 85% of the sponsors. Smaller brands Marathon (Ecuador), Legea (Bosnia-Herzegovina) and Burrda (Belgium) all sponsor one nation. Remarkable is that Marathon is the only brand of these three smaller, rather national, brands that originates in the country it sponsors. 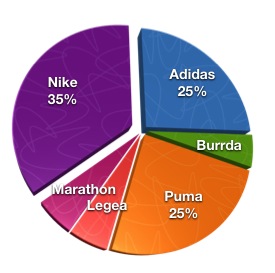 The tennis elite is more diverse when it comes to their clothing sponsors. Twelve different brands are represented in the top 20 of men and women (see figure below). Again Nike and Adidas dominate, with respectively 30% and 27.5%. Lotto is the third largest player, sponsoring five players. 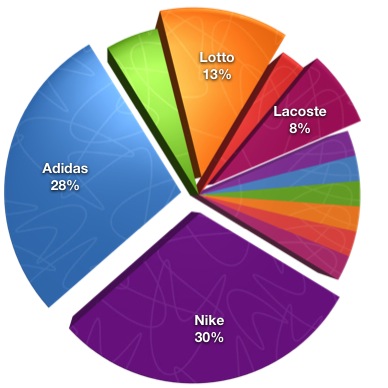 Where Adidas had the UEFA Super Cup, Oregon-based Nike had great marketing opportunities around the US Open women’s final earlier this month. The finalists, Serena Williams and Victoria Azarenka, are both sponsored by the brand. The tennis players also play with the same equipment manufacturer, Wilson. The top 20’s tennis rackets are from six different manufacturers (Wilson – 22.5%, Head – 25%, Babolat – 22.5%, Yonex – 15%, Prince – 10% and Dunlop – 5%). In contrast to the clothing sponsors where two brands dominate, each equipment brand sponsors a relatively equal amount of elite players in the top 20.

During the Olympic Games 2012 the sponsor landscape of the top 20 countries’ kits was diverse with 12 different brands. Adidas, also official sponsor of the London Games, sponsored six nations accounting for 30% of the top 20 countries. Nike and Asics followed with respectively 15% and 10%. Several surprising brands were also present (see table), such as Italy’s EA7 by Giorgio Armani or 361º sponsoring North Korea. Despite more diversity and more ‘national’ brands compared to the tennis and football elite, Nike and especially Adidas were again leaders and highly visible.

So the dominance Nike and Adidas have on the streets and in the shops occurs just as much on the football pitches around Europe, the holy grass of Wimbledon and during the Olympic Games. As one can expect sponsoring, visibility and sales reinforce each other like a snowball effect. After all more sales does lead to more opportunities to sponsor the best of the best, and sponsoring the elite does tend to increase sales.