Base camps during the 2014 FIFA World Cup Brazil 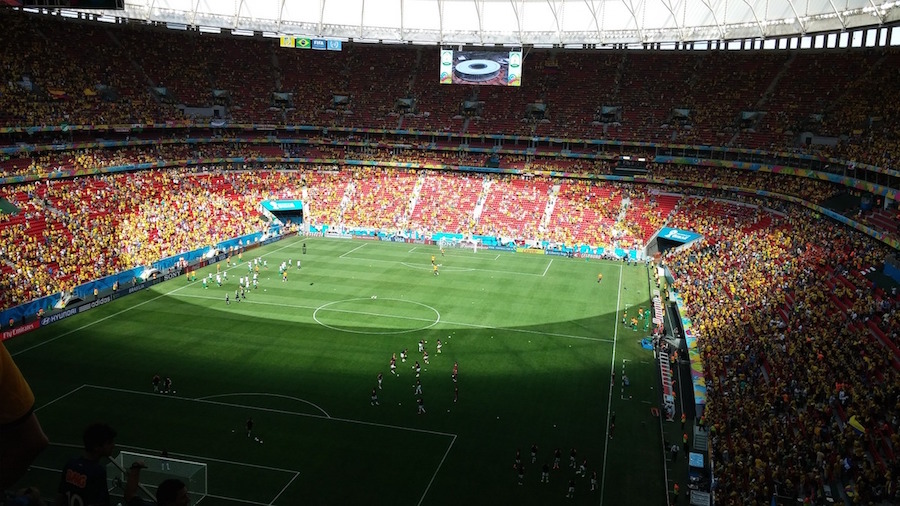 A new year has arrived and it is a year filled with major sports events. One exciting event is the 2014 FIFA World Cup Brazil that takes place from June 12 till July 13. Last month (December 2013) the draw set up some great group stage matches. What to think of the replay of the 2010 World Cup final between Spain and The Netherlands? Can ‘La Roja’ beat ‘Oranje’ again? Or promising matches between England vs. Italy and Germany vs. Portugal? The draw was a nervous matter for the 32 teams competing in the tournament. Besides from whom they will face, travel distance, climate and kickoff times are all factors to be taken into account at this World Cup.

During the World Cup 64 matches will be played in 12 different stadiums. With Arena Amazonia (Manaus, Amazonas) and Estadio Castelao (Fortaleza, Ceará) in the north and Estadio Beira-Rio (Porto Alegre, Rio Grande do Sul) in the south there is a maximum distance of around 3200 km between host cities. Manaus lies in the middle of the Amazon rainforest and has an average high temperature of 31˚C and 82% humidity in June and July. Playing in the largest rainforest in the world will greatly influence the physical performance players are able to showcase. Porto Alegre on the other hand has an average high temperature that is more than 10˚C lower in these months.
The large differences in circumstances between host cities makes one wonder whether it is truly a fair competition? And considering these differences where should a nation set up base camp?

Factors to consider in picking a base camp

There is an array of factors nations have considered and should consider when deciding where to set up their base camp. FIFA has a list of base camps nations are allowed to choose from. The preparation process starts long before any qualification is certain and the draw is performed. So decisions have to be made before all information is available. Travel distance (only certain after the draw) is of importance. As a team you want to minimize travel time, including hotel-airport commute, because traveling (especially by plane) generally affects the body and thus performance. The same applies to hotel-training ground commute.
Climate can also have a major impact. Acclimatization to extreme weather is necessary, but training in extreme circumstances is absolutely not beneficial for players and their performance abilities. Looking at the base camps nations have chosen (see table) it seems they do take weather into account. All but three nations are based in the southern half of Brazil. Many nations, including the three in the north, are close to the coast. This might have something to do with more wind. 23 of the 32 teams (72%) have their base camp in the states Rio de Janeiro, Minas Gerais and São Paulo. Spain will have their base camp in Curitiba (Paraná), where the temperatures are milder. A major change compared to their base camp during the Confederations Cup last year. Apparently they learned a lesson from the conditions they faced.

Lucky and not so lucky

The draw is extremely decisive in a nation’s chance of reaching the knockout stage. But even excluding whether a nation faces easy or tough opponents, the draw saw some lucky, like Belgium, and not so lucky, like the USA and Italy, nations. The USA definitely drew the short straw in both opponents and cities they play at. The USA has decided to stay at the pre-draw chosen base camp in São Paulo. They will have to cover more than 7000 km to play their group stage matches. That is 8.5 times the amount of kilometers Belgium has to cover from their base camp in Mogi das Cruzes (São Paulo).
Based in Mangaratiba (Rio de Janeiro), Italy has to cover similar distances as the USA. Both play their group stage matches in Manaus, Natal and Recife. These three cities, together with Fortaleza, have the toughest climate conditions. Belgium plays in Belo Horizonte, Rio de Janeiro and São Paulo, all in central Brazil with far milder circumstances.

The extreme conditions will limit teams’ ability to perform. Although direct opponents have similar circumstances to deal with, the knockout stage will see teams with far more kilometers traveled and having played in tougher conditions face teams who are fresher. So the draw has a great influence on a nation’s chances, if not in the group stage definitely in the stages beyond that.